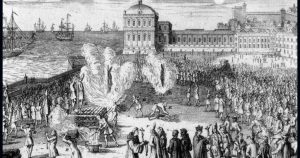 Few misuses of words anger us as much as our enemies calling us Nazis. Because we have kept alive the memory and the pain, we feel the enormity of the injustice of turning victim not only into victimizer, but into the worst victimizers known to Man.

While it may be difficult to exceed the verbal wrong committed by calling Jews “Nazis,” it is not impossible. Indeed, it has happened many times – by our own. When Jews we would like to pretend don’t exist make the very same ugly charge – and direct it against the very soldiers of Tzahal that put their lives on the line to protect all other Jews – we understand. We understand that if Jews can call other Jews “Nazis,” then it should not surprise us that our ears have to hear our external enemies doing the same.

Can it get worse? Probably not. But people can come close. A few days ago, R Aron Teitelbaum of Satmar/Kiryas Yoel voiced his disapproval of the New York State Commissioner of Education for her ongoing attempt to force compliance with state curricular standards.

Now, the Rebbe has a few valid points about the disagreement with the State. Not surprisingly, so does the State. That is usually the case in a disagreement about a deep-seated conflict.

How the Rebbe expressed himself is another matter.

“She wants to change Klal Yisrael and remove us from our religion exactly as the Greeks wanted in their time, to destroy the education institutions, a decree of forced conversion (shmad). Who would have thought that here, in the greatest democracy in the world, a time would come when a decree on education would become reality?”

The Rebbe is known to be a clever, smart man. He cannot actually believe that the NYS Dept of Education is working for the apostasy of the Torah-true Jews of Kiryas Yoel and Williamsburg. So its just a bit of literary flourish, right? A bit of dramatic exaggeration? In a country currently awash with hyperbole, the Rebbe is perhaps no different than many in politics, broadcasting, and the academic world.

But there is something else wrong with this. Employing the “shmad” charge in this context cheapens centuries of Jewish history, and minimizes the sacrifices of countless Jews who laid down their lives in times of real gezeiras shmad. They knew the difference between the NYS Commissioner of Education and the likes of Antiochus, Torquemada, Count Uvarov, and the raiding parties in Iran that forcibly converted entire villages of Jews.

The Rebbe certainly knows that there is no locale in the entire country with a larger percentage of people living on the public dole than Kiryas Yoel. Not too many people are going to believe that the government is trying to wipe them out as a community. The Satmar argument that the State’s demands are excessive has some merit. It would be better, however, if it did not match that excessiveness with words that are a slap in the face of centuries of kedoshim.