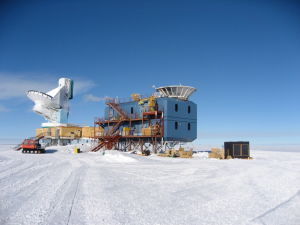 I don’t believe any of these things because I don’t have to…I have evidence for them. For centuries, scientists have used evidence to test their ideas of the physical world. It’s called the scientific method and it’s the most powerful knowledge generation tool ever invented.

In contrast, it’s common to use words like ‘belief’ or ‘faith’ when discussing God. Although the universe seems designed for our existence, even the faithful admit that’s not indisputable proof that a Designer exists. They take it on faith. Because of the lack of cold, hard data it’s probably not surprising that over 70% of the National Academy of Sciences, the most prestigious association of scientists in the United States, do not believe in God.

So, how do secular scientists account for our existence without a Creator? Many cosmologists believe the explanation lies in a new theory called the multiverse. According to these scientists, what we used to call ”the universe” is not the whole enchilada…far from it. In the multiverse theory, our universe is accompanied by not just one or two other universes, but perhaps by an infinite number of other universes, most with properties nothing like our own. Some would be too cold for life like us to develop, some too hot. But, with an infinite number of possibilities, some would be just right.

To supporters of the multiverse, our existence is an accident that was bound to happen in the capacious cosmos. What’s surprising though, is that even scientists who believe in the multiverse admit there’s no hard data supporting it.

How is a scientist supposed to evaluate an idea for which there is no evidence? In 1959, Karl Popper devised a way to test if an idea was truly scientific, or if it was pseudo-science cloaked in technical dressing. He said if there’s no way to disprove a claim, if it can’t be falsified, it’s not science. Originally, Popper’s bete noir was astrology, whose practitioners divine the fate of individuals from the positions of celestial bodies on their day of their birth.

Popper noted that astrologers’ predictions were so nebulous that nothing could falsify them. Here’s a typical horoscope for me, a Virgo, “Today will bring an unexpected challenge”. Such a prediction is so imprecise, it’s bound to be accurate; not only for my sign, but for the other eleven as well. Popper said, “It is a typical [astrologer’s] trick to predict things so vaguely that the predictions can hardly fail… Those among us who are unwilling to expose their ideas to the hazard of refutation do not take part in the scientific game.”

Sadly for Popper, nowadays, newspapers still devote more ink to astrology than they do to astronomy. The reason for this is simple: people are naturally biased to believe vague, but accurate, explanations of their fates, especially when it comes from an authority.

Despite stereotypes to the contrary, we scientists are people too. We sometimes want to believe things that comport with our own theories and discard discordant data, a phenomenon known as confirmation bias. Scientists also represent society’s most revered authorities. Unfortunately, the combination of authority bias and confirmation bias is leading to some pretty unscientific effects, especially when it comes to the biggest theory of them all, the multiverse.

Take Nobel laureate Steven Weinberg. To Weinberg, the multiverse’s infinite vastness is good news, offering a reason why “we find ourselves in a universe favorable to life that does not rely on the benevolence of a creator, and so if correct will leave still less support for religion.”

But this is also the bad news when it comes to the scientific method. For, as physicist Paul Davies. Davies said, “Invoking an infinity of unseen universes to explain the unusual features of the one we do see is just as [made up] as invoking an unseen Creator. The multiverse theory may be dressed up in scientific language, but in essence it requires the same leap of faith.

Since any data, even the absence of data, is consistent with the multiverse, this model of cosmogenesis is immune to falsification. Because of this, some of its detractors call the multiverse a “theory of anything”, reminding me of GK Chesterton’s quip, “When men stop believing in God they don’t believe in nothing, they believe in anything”. In the case of the multiverse, Chesterton’s wisecrack is literally true: the very same scientists who reject God’s existence due to insufficient evidence have placed their faith in a theory which seemingly neglects the scientific method.

To be fair, there are few proposals out there to test the multiverse hypothesis and some say it’s just a matter of time before evidence is found. But be wary when a cosmologist tells you to be patient: it might take a billion years before we know the answer. Until then, cosmologists must keep the faith.

Now as cosmologists struggle to explain the universe we see, to explain the very existence of time, space, and even life, scientists should be take an candid accounting of their motivations for supporting the theories they support. If they can do so honestly, there’s hope they can remain in Popper’s scientific game. Otherwise they might just be taking a huge leap of faith.

Brian Keating, an observant Jew ​, ​is Professor of Physics at UC – San Diego. He designed and built the BICEP telescope, optimized to peer back to the very first moments after the Big Bang​. ​ His exploits at the South Pole​, where the telescope was placed,​ are chronicled in his new book, Losing the Nobel Prize: A Story of Cosmology, Ambition, and the Perils of Science’s Highest Honor.