Rational, Irrational, and What’s Between 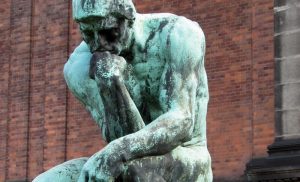 Half of the art of a good polemicist is attaching an effective label to his argument. My good friend Rabbi Dr Natan Slifkin found a winner in calling his approach “rationalist Judaism.” Who doesn’t want to see himself as rational? Measured by the success of his blog by the same name, Rabbi Slifkin has succeeded in attracting a large readership. Only research could tell us how much of the response is baruch Mordechai, and how much is arur Haman. In other words, are people looking for a new approach, or are many simply fed up with what Rabbi Slifkin sees as egregiously non-rationalist approaches[1] that have taken hold in parts of the Orthodox community. Even not on Purim, there may not be that much of a difference.

I am not going to disagree here with his central thesis: that there is a viable, self-contained approach to Torah Judaism that downplays or completely dismisses mystical elements. It is not my Yiddishkeit, but I don’t have a veto over what people believe. He can point to important figures in the rich (and varied!) hashkafic literature going back to the times of the Geonim and Rishonim who might be associated with such an approach. But good arguments sometimes resemble minefields. One misstep and things start blowing up. People who roll that delicious self-description of rationalist Judaism on their tongues can – and often do – extend the arguments, and arrive at conclusions that simply do not follow. I would like to call attention to some of the places that the intrepid reader of Rationalist Judaism might falter, with disastrous consequences.

You may have noticed the opening three words of the essay. Don’t dismiss them as an empty exercise in civility. Rabbi Slifkin and I are indeed good friends, and have been for many years. I was his shadchan. I penned haskamos for several of his works, including the most controversial ones. I refused to recant those approbations. I believe that I am more aware than most of how much good some of those books accomplished, how they preserved the Yiddishkeit of so many bright, frum, souls. His approach to evolution is still the single best work I know of for people who see evolutionary thought as an obstacle to their full observance. He, in turn, has kept me on the Board of the Biblical Museum of Natural History. Over the years, our Torah world views have grown somewhat apart – but not our friendship. As much as I disagree with elements of his approach to certain issues, I just as much believe that the friendship of frum Jews who disagree with each other is exactly what HKBH expects of us.

The most dangerous misstep that one can take is to confuse non-rational with irrational. They are not the same. Non-rational approaches make use of assumptions and vocabulary that are less immediately obvious than those of rational approaches. The rational purist finds them unacceptable and unconvincing. The non-rationalist accepts kinds of evidence that many thinking people would not find adequate in arenas of thought outside of Torah hashkafah. Irrational approaches, on the other hand, are very different. They involve logical contradictions and impossibilities, like positing that certain quadrilaterals only have three internal angles. The rationalist, then, is entitled to find assertions of the non-rationalist to be implausible – but not impossible.

It is also important to realize that insufficient evidence does not mean no evidence at all for the non-rational approaches. Those who follow them – myself included – accept as evidence the sheer number of Torah luminaries that embrace them. We trust the chachmei ha-mesorah – in this case, probably the vast majority that have had a major impact over the generation. We trust them not only within the narrower confines of pure halacha, but in how to think and emote as Torah Jews. Reasonable people can disagree about whether to find intellectual safety in the company of so many others, but those who do are not accepting the irrational. They disagree about the strength of some kinds of evidence. The non-rationalist does not dismiss human logic as worthless. People who buy into overt logical contradictions, on the other hand, can be justly criticized for dismissing rational thought – what some of our Rishonim saw as the tzelem Elokim – the very image of G-d. Someone who accepts the evidence behind non-rational Judaism cannot be accused of the same.

Another fallacy that can result from improperly digesting Rabbi Slifkin’s posts is that Rational Judaism is…rational. It can’t be entirely so. Rabbi Slifkin firmly believes in Hashem, and is fully observant. But belief in a Higher Power who is not bound to the laws of Nature isn’t entirely “rational” to those who reject any belief that cannot be sustained by empirical evidence.[2] Belief in G-d, they argue ( (ע”לis as attractive as supporting the Flying Spaghetti Monster. A dogged insistence on eliminating everything other than the empirically knowable just doesn’t work well with revealed religion. The rationalist can move away from leaps of faith, but smaller investments of that faith will remain necessary.

Moreover, it cannot be demonstrated that, of the two choices, rational Judaism is a priori better or superior to the non-rational forms. Insisting on certain kinds of evidence may very well be the best way to do science, but it can be stultifying and confining as well. Much of our personal experience cannot be shared, proven, or replicated. As many have observed before (especially Rabbi Lord Jonathan Sacks in our day), science can tell us the “how” of existence, but not the “why.” It also cannot tell us much about some to the ideas that are most important to us, like love, goodness, loyalty, and kindness. The Ramchal writes that one of the reasons that Hashem made theurgic phenomena real is to ensure that people would not be so smug as to believe that their human understanding could apprehend everything around him. He purposely designed phenomena that conflict with his reason, so that he should not give reason more prominence than it deserves.

Related to his is the claim that rational approaches are better, because they appeal to our common sense. But “common sense” often comes up short because the obvious turns out to be wrong, and because some things cannot be understood through “common” tools, but require much background and sophistication – often, in a non-intuitive manner. Common sense had people believe that the earth was at the center of the universe, surrounded by celestial bodies travelling in circular paths. Or that there was force over distance. Or no force over distance. Parts of quantum mechanics have struck writers as in synch with Eastern mysticism, or simply contrary to expectation – even though correct.

Perhaps most importantly, it is a fallacy to think that the choice of rational or non-rational is binary. There is a huge continuum on which these positions fall, and an infinite number of points between the end points. The Jew who rejects the limitations of a rationalist Judaism does not necessarily conclude that revelation is superior to reason, and that since he cannot understand everything, he will not try to understand anything. We have a rich tradition of mechabrim who fully accepted the mystical tradition, and endeavored to translate as much of it as possible into less mystical language. The Maharal and Ramchal certainly belong to that tradition.

There are two take-aways from this discussion, I believe. The Jew who does not see himself in synch with the approach of Rationalist Judaism need have no hesitation about buying into an inferior product – low culture Judaism, as it were, relative to high culture. That just isn’t so. We should also understand, however, that for many G-d fearing, wonderful Jews, Rationalist Judaism is a lifesaver, and a legitimate way for them to serve Hashem.