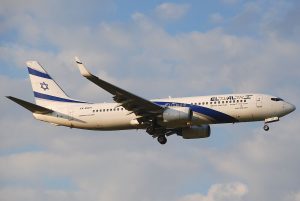 The Israel Airports Authority has rejected a billboard urging female airline passengers at Ben-Gurion Airport not to give up their seats to Orthodox men who don’t want to sit next to women.

The billboard, commissioned by the Israeli counterpart of the American Reform Judaism movement, depicts two adjacent airplane seats, with a pair of women’s shoes on the floor below one seat and the black hat traditionally worn by Orthodox men on the seat of the other. “Ladies, please take your seat … and Keep it!” urges the ad.

Several months ago, the Port Authority of New York and New Jersey rejected a similar “public service message” for Newark Liberty International Airport submitted by the same Israel Religious Action Center (IRAC), which wanted to have it posted in the Newark airport’s passenger waiting area for Israeli flights.

The group had hoped to display the Tel Aviv airport ads during the Passover travel season.  But it was fated to go the way of observant Jewish homes’ leavened bread.

As an American (if Orthodox Jew), nursed on our national First Amendment mother’s milk, I’m discomfited by the notion that a point of view – even one I may disagree with – should be prevented from being expressed.  The antidote to offensive ads, in my book, are ads countering them.

And yet, here, I think, a meta-concern trumps the First Amendment one.

My black hat, suit and tzitzit notwithstanding, I don’t personally care if I am seated next to a woman on a bus or plane.  The only time I have asked for someone to switch seats with me was when my wife and I were seated in different rows on an overseas flight. Had I not easily found a willing switcher, my wife and I would have resigned ourselves to our fate and reunited on landing.  But the first passenger I asked was more than happy to oblige us.

I do, however, know other Orthodox Jews who, hewing to their own particular traditions, do not want to sit in close proximity to members of the opposite sex (yes, it works both ways: some Orthodox women prefer not to sit next to men) unless they are close relatives.  I even know of people who actually buy two seats on a flight to ensure that no one is sitting next to them.  (More room to spread out that way, too, quite a perk, if an expensive one, these sardine flight days.)

But try as I might, I can’t seem to inhabit the mindset of any man or woman who, asked to accommodate the religious concerns of another human being, would take it as an insult, much less campaign to tell people to refuse such a request.

That’s when “menschlichkeit” – quite literally, “acting like a mensch” – kicks in (or should).  That rightly hallowed ideal entails, among much else, trying to make others comfortable even when their definition of comfort may differ from our own.

IRAC is, in essence, waging an anti-menschlichkeit crusade.  It and its supporters are asking people to refuse polite requests for no reason other than the request itself.

These days, when lechery seems so ubiquitous, from middle-aged Hollywood adolescents to vulgar political leaders, one might even try to appreciate a moral stance that aims for a somewhat ascetic opposite.  But whether or not one can relate to not wishing to sit next to a member of the other sex, one can certainly endeavor, when asked to help such a decorous soul, to be a mensch.

I know that if I am ever faced with, say, an IRAC activist who does not wish to sit next to me on a flight because I discomfort him by reminding him of his forebears, I will smile politely and, if a willing other passenger can be found, happily switch seats with him or her.