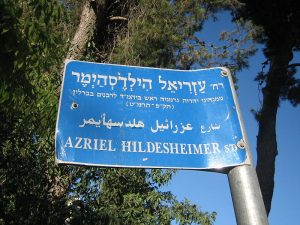 From Israel, a different chunk of the globe falls within easy travel range to the former American. Should someone have a reason or predisposition to visit Europe, frequent and cheap flights make many cities practically a short hop. Thus, the Old Word becomes a new world to explore and experience.

Except that for a Jew – for whom memory is a mitzvah – any newness is dulled by the oppressiveness of the old. Especially in Berlin.

I’ve returned from a very brief visit there. It would not have been close to the top of my bucket list, but one of my sons recently moved there as a founding member of a new kollel. The birth there of a new granddaughter suddenly moved Berlin to must-go status.

I’ve had plenty of interaction with Germans, especially the newer generations. I did not expect to feel the intensity of the past as much as I did. The move to Israel made things worse. I started the day in a place where I felt a sense of pride (and even possession) in every precious inch. A few hours later, I walked where no Jew can ever feel fully at home. In the morning, I was as visibly Jewish as I could be. Getting off the plane, I donned a cap (this, I was told, was the practice of most of the frum community) to be a bit less in-your-face to the non-Jews. Galus had returned, big time.

Wearing a cap doesn’t enable one to hide his Jewishness – only to appear a bit more timid. I experienced no anti-Semitism. Then again, Berlin is in a way the least German of German cities. The people, the stores, the eateries are a mélange of cultures and populations. Berlin has long been a magnet for all sorts of people. If you want to feel authentically German, you have to go to Frankfurt or Munich.

The past, however, is not too far away. Getting off a train, I noticed the destination sign for the train on the other side of the platform: Wansee. It was a destination we had been to before.

Here, in 1942, senior Nazi government officials met to discuss the implementation of the Final Solution.

One cannot escape the sense that a Jewish presence in Germany – indeed anywhere in Europe – can only be maintained artificially. Within Berlin (as opposed to other places in Germany), the threat is not a resurgent far-right, but the Muslim population. The Adass Jisroel community organization in the old East Berlin (a continuation, at least in name, of the community before the War) are all housed in one complex: the Rabbiner Seminar (continuing the famous Hildesheimer Seminary), the Skoblo Synagogue (a Polish shul before the War), a day school, and now the Kollel. The complex is guarded by serious security inside, while the police not only maintain an armed presence outside, they do so from a permanent booth. (You will see the same in Rome, although the German police presence seemed much more professional to me.) Having visited, however, I viscerally get why some people have dedicated time and energy to keep alive communities that are anachronisms in a Europe that has turned hostile to Jews. Throwing in the towel would seem like granting the bad guys a victory over the Jews that they should not be allowed. While the best answer to their malign intentions is the further upbuilding of thriving Torah communities in the State of Israel, they should not so easily be granted their wish to see a Europe that is Judenrein.

Sidebar: Quite apart from the issues that affect us directly as Jews, one part of Berlin should be seen by every American. My son lives a half a block from the street down which the infamous wall ran. It actually ran down many streets; it was many miles long, surrounding Free Berlin from the surrounding oppression of the communist east. His location, however, was one of the more famous spots. A bit of a hill on the western side gave people in the garrison city an opportunity to at least trade glances with their captive relatives on the other side of the wall. At one point, a platform was built to make this even easier. Today, a few blocks of this street offer testimony – through photos and accompanying text – to the crimes of the Soviet system and the allure of freedom, which made the American Revolution call of “Give me liberty or give me death” a plan of action for scores of East Berliners. Many did not make it. There are photos of the East Germans firing on people sprinting through what was called the Death Zone, aiming to kill them for the crime of wanting freedom. There are photos of those who lay dying in the street, inches away from loved ones in the West who could do nothing to save them. These should be seen by all who take the freedoms of the West for granted.

We return to the main topic. Warm, fuzzy feelings of Jewish euphoria, then, were not to be had in the context of the old. They were, however, available by looking only at the new. Something special and touching is going on in Berlin. (I write here only about the East Berlin community. There is another across the city in West Berlin, but I did not have an opportunity to visit it.) It is today one of few communities where there are many more 8 year olds than 18 year olds. It’s growing, not shrinking. There is a growing day school, several shuls, a kosher market, and a program that continues to send German-speaking rabbis to the rest of the country, named after the famous pre-War Hildesheimer Seminary. The shul I attended Shabbos morning brought scores of people together for an extensive kiddush that is a weekly feature. (Alas, there is no pizza shop.) The Lauder Foundation has sunk resources into this community, and had the fortune to retain the energetic and astute Rabbi Josh Spinner to coordinate its efforts across Europe.

It has been noted before that even the smallest Jewish communities can be riven by discord. (Visiting refuseniks in Moscow in 1988, we were saddened to observe tiny sub-communities, each having little or nothing to do with the others. There was a Chabad faction, a Mizrachi faction, a yeshivish faction. They all pretty much went their own ways.) Within the nascent Berlin kehila, there are at least three groups with very different temperaments and needs. Immigrants from Russia, despite having lived in Berlin for many years, have a very different take on Yiddishkeit, politics, moderation, and authority than do the yordim from Israel. Both of these are different from the baalei teshuvah and recent converts, who are very much on an upward learning trajectory.

The factionalizing of the small community has meant an inability to rally around a single, dynamic rav. There is no de facto Torah authority as of yet. Without such a person, you might think that no real growth can occur.

Here is the pleasant surprise that snatches a bit of victory from the jaws of divisiveness. While they cannot as of yet agree on a leader and rav, they can agree that Torah is important. This made Berlin a perfect candidate for an outreach-oriented kollel. Both R Spinner and BMG director R. Aharon Kotler realized this when they met. Lakewood had both the manpower and the organizational ability to bring the project to fruition in short order. Five couples moved to Berlin after Sukkos, and the locals seem to love them!

Not every community takes off when it imports a kollel. Not every kollel has proven to be the best match for its community. But sometimes it is a pure joy to behold Torah working its magic, as it is doing in Berlin, binding Jews to each other, and them to their Creator.

Returning to Israel, I have a heightened sense of privilege. I recall some of my favorite words of the Meshech Chochmah (Devarim 30:12) (my paraphrase):

Vouchsafed to the heart of a Jew is a commodity that will lead straight to a return to Hashem. In the Jewish heart he will find a love for the Jewish people. That love guarantees an eventual return to Hashem! When a Jew is in touch with the love of his people that became part of his nature at Sinai, he will connect with his spiritual roots. By returning to his people, a Jew will certainly return as well to the G-d of that people.

I am grateful to HKBH that I am able to appreciate and participate in the learning of our Torah that illuminates the mind and is a balm for the soul. And, as of late, I am able to do so among millions of Jews who only recently have begun to remember what it is to function as a nation- one that, consciously or not, has Hashem at its core.