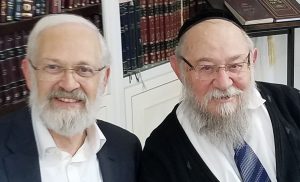 Rabbi Hillel Goldberg, serious scholar, editor of the Intermountain Jewish News, and friend for decades, called shortly before I left the States, warning that I was on the cusp of never learning seriously again. Puzzled that he thought that this was the fate that befell someone looking for the next level up in avodah, I asked him to explain. Simple, he said. There are so many fascinating people in Yerushalayim, you can easily run from one to the next to take them all in. You will be so busy, you will never have time for consistent Torah learning of your own.

Fools rush where seraphim and ophanim fear to tread, so I blissfully ignored R. Goldberg’s advice when offered an opportunity to meet one of those people. R. Moshe Grylack’s son-in-law called my son (with whom we stayed until our apartment becomes habitable) to inform him that the veteran journalist and Mishpacha editor-in-chief was staying with him, and that I was welcome to come over.

We had clashed before, in the pages of Mishpacha and Cross-Currents. The give and take was completely respectful, without a trace of anything ad hominem. Yerushalayim, however, was true to its name – the City of Peace – and I was immediately overwhelmed by his graciousness.

We spoke about a good number of things. He filled me in on the history of Torah journalism in Israel; I gave him an overview of developments in the US Orthodox world, particularly the difficult decision that the OU still has to make regarding the march of schismatic misadventures of Open Orthodoxy. We spoke about how those moves related to cultural changes in Western society in general, including antinomianism, the elevation of personal autonomy over other values, the preference for feeling over thinking, and the postmodern cynicism regarding the very existence of truth.

What he really wanted to speak about, however, was the greatness of R. Aharon Leib Shteinman zt”l. We were still too close to his loss for him to digest anything else, without him first unburdening himself cathartically. He had been close with him, as he had with many other gedolim of the last decades.

R Grylack had seen significant history unfold, and had played a role in its development. In his youth, he had survived in the forest with siblings, hiding from the Nazis. He fought in the War of Independence. He learned in Ponovezh, and was close with R Shach, who asked him to serve as the founding editor of Yated Neeman. Effectively, he had been an astute observer of both the development of the State, and of haredi Judaism in Israel. He parroted no party line, and wore no blinders. His appreciation of the haredi Torah world was not starry-eyed or naïve, but born of comprehension of its depth. He was fully aware of problems within the haredi world. Yet, having been close to so many exemplars of Torah excellence over the years, he could differentiate between the areas of weakness and greatness. He had confidence in the ability of the latter to ultimately triumph over the former. If he had to criticize, the words of rebuke would be muted and measured, mindful of any collateral damage they might inflict.

Speaking with him, I remembered important conversations I had with some of my mentors in my youth, particularly R. Nachman Bulman zt”l. In him, I had experienced a similar mixture of fierce commitment to a Torah community, razor-sharp criticism, open-mindedness, intelligence, and a striving for truth. I realized that what I experienced in my conversation with R Grylack is something that I had not been able to find in the US for many years: an intelligent mind that had been set on fire by the gachaltan shel chachamim, and that had never lost the glow or the warmth.