The Museum of the Bible and the Binary Error 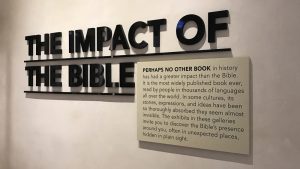 The Museum of the Bible (MOTB), the largest privately-funded museum in America, opened to the public on Saturday, November 18th. It was not a Jewish project; the people behind it are largely evangelical Christians. Yet, traditional Jews have a stake in this enterprise. Its opening is welcome news. It is both a powerful voice that reminds Americans of the importance of belief in a Higher Authority, and a showcase for the interconnection of Jews, Judaism, and the Land of Israel.

America needs this museum, and traditional Jews need an America that is enriched by this project. Religious belief and practice in the United States – still one of the most religious countries in the Western world – is not what it used to be. Attendance at religious services is down. The fastest-growing religious group, according to Pew, is the “nones,” those who respond to pollsters that they identify with no religious group at all. Christian retention rates (the percentage of those who remain in the religious group in which they were born) range from unacceptable at the upper end (65% for evangelicals) to abysmal (45% for mainline Protestants).

Even more significantly, the mood of America has shifted. A plethora of lawsuits that would restrict rights of religious people, especially when they run counter to new PC orthodoxies, threatens to shrink the area in which constitutional guarantees of freedom of religion operate. First Liberty Institutes’ Undeniable documents 1400 religious liberty incidents. Behind this is an attitudinal change that augurs for more serious moves away from religion in the future. More than half of all Americans now believe that one does not need to believe in G-d to be moral or have good values.[1] The rapid about-face of Americans regarding gay marriage speaks of a large shift towards autonomy, and away from authority. This has fed a rise in atheism, and hostility to strongly-held religious values.

The culture wars are over, claim some people. Religion has lost. There has been much hand-wringing in conservative Christian circles. This is nonsense. I like to call it the Binary Error – as if life can be reduced to decisions between two options, with winner-take-all consequences. The thinking runs something like this: The spiritual cargo that the Mayflower unloaded at Plymouth Rock continued to dominate America, until the US Supreme Court’s Obergefell decision. That reversed things. Paganism scored a knockout; the champ was unseated and shamed; the godless now rule the West.

This is crude and untenable reasoning. Belief/disbelief is not a toggle switch. No matter what some shapers of our culture preach, the fact remains that the hundreds of millions of Americans who professed belief in a Creator a few years ago did not vanish into thin air. It is true that they are not yet accustomed to function as part of a sometimes-detested minority, and that they face tough cultural and political challenges ahead. It is also true that one of the most difficult challenges is the undercurrent of so much of contemporary culture that mocks and derides as primitive anything seen as old. (“Old” generally refers to something that predates the latest version of the iPhone. It contrasts with words like “ancient” and “prehistoric,” which apply to things as old as the Beatles.)

No one knows with certainty where this will all lead – whether to a further descent into a swamp of moral decay, or to some pendulum swing back to repression, or to something altogether unknown. Here is where MOTB is so helpful. Rather than mourn or wait for redemption, MOTB reminds Americans (and likely many foreign visitors) that the past continues to inspire us and guide us. It does not proselytize or preach. (It would be far less effective if it did.) Rather, it simply tells the story of what the Bible is about, the outsize influence this one work had on the history of civilization, and how its power continues to show itself in law, philosophy, popular culture, and the advancement of human rights. It subtly suggests to visitors that, paraphrasing Mark Twain, rumors of the demise of religious conscience are greatly exaggerated. The Bible – and perhaps the wisdom of the past in general – has not gone extinct as a kind of literary dodo bird. Before people buy into a world view in which only the future is important, they should pause to consider just why the Bible has been so important to so many people. They may find their lives changed by the answer. MOTB, then, is for the people who have not fully embraced the new hostility towards the Judeo-Christian message. There are lots of them around.

Surely this is important to us as traditional Jews. We cannot fare as well in the US as we have in the past if we will be surrounded by people who regard all strongly-held religious belief as repugnant. We have a vested interest in keeping alive respect for the contributions of the past in general, and for G-d and His revealed word in particular. MOTB will be an effective, non-confrontational and non-invasive tool in making that happen, at least for the many millions who are still capable of accepting such a message.

In telling the story of the Bible, MOTB offers an important dividend for traditional Jews. The visitor cannot help but absorb the story of the connection between the Land and the People. Too many Americans have been exposed to the opposite. Some have swallowed the line of the left and of the Palestinians, that the Jewish claim to a piece of the Holy Land began with Western guilt for the Holocaust. Others have been exposed to the revival of theological supersessionism, which strips Jews of any connection to the covenants of the Bible. MOTB vividly exhibits the history and archeology that demonstrate the ancient Jewish stake in the Land. It also shows the foundational contributions of Judaism to Christianity. This has to be good. We lost the liberal churches decades ago. We want the conservative churches to stay in Israel’s corner. Without addressing the Middle East conflict at all, MOTB’s subject matter will work to keep friendly Christians committed to Israel’s well-being.

Some transparency. I have been involved with MOTB for almost two years. I have been impressed (overwhelmed might be a better word) by the graciousness of the people in charge. They have tried as hard as they could to not offend the sensitivities of other religious communities (especially those that share a reverence for Scripture), as well as secular and academic groups. I served, along with a few other Orthodox representatives, on their International Advisory Board, and can attest to their willingness to make the changes we suggested. (I am not suggesting that their portrayal of the message of Tanach is suffused with the spirit of Chazal and traditional Judaism. It isn’t. But it lacks the crudeness and offensiveness of other portrayals in popular media.)

Everything about the museum is of biblical proportions. The building itself houses 500,000 square feet of space, including permanent and temporary exhibit areas, theaters, and a restaurant. It is airy and roomy, with high ceilings. All the funds (about $600M) were raised – without Federal contributions – from some 58000 donors. It is located in close proximity to the Smithsonian museums, and the National Mall. It benefits from a close relationship with the Israel Antiquities Authority, as well as the Vatican Library.

Delivering the invocations at the pre-opening dinner last Thursday night were Dick DeVos (married to the pro-voucher Secretary of Education), and Rabbi Steve Weil, the Senior Managing Director of the OU. Sitting among the 800 very Christian guests at the dinner, I felt like an honored guest, rather than a tolerated nuisance. The program was redolent with pro-Israel material.

Will observant Jewish visitors to DC want to visit the MOTB? That depends on their objective. MOTB can offer the Bible – but not what we know and experience as Torah. We are fortunate in having the humble beis medrash for that, and for not needing the assistance of cathedral-scale buildings to intensify the message.[2] I cannot think of a better place, however, to bring groups to consider the impact that the Torah had on Christians, and on the development of Western society. These are topics well worth our consideration.