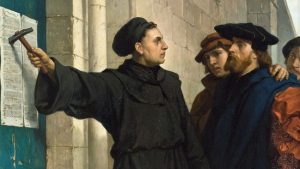 Sure, something is missing in the title. The word “happy.” Couldn’t bring myself to write that. Read on.

You’ve heard the story before, but it continues to elicit chuckles.

The Jew, humming to himself, sits in an aisle seat on a train, chugging along on its way somewhere in Russia. The ticket-collector says to him. “Hey, Zhid! Get your bag out of the aisle.” The Jew ignores him. Now disturbed, the collector, yells at him. “Jew! I told you to remove that bag.” The Jew goes right on humming. Irate, the collector tries again. “Dirty Jew! Didn’t you hear me? If you don’t listen to me, I will take that Jew-bag of yours and throw it out the window!” His eyes closed, the Jew’s thoughts are on the Shabbos he will spend with friends at his destination. He pays him no attention. The collector opens a window, picks up the bag, and throws it off the train.

The Jew keeps humming, but his words can be heard under the tune. “It wasn’t my bag…”

Martin Luther’s Reformation certainly wasn’t our bag. The man treated us pretty shabbily, to say the least. So as we note that Oct. 31, 2017 is celebrated as the 500th anniversary of the posting of the 95 theses on a church door in Wittenberg, we omit the word “happy” in front of it. We’re not celebrating.

Not all Christians will find cause for celebration either. The Reformation certainly did not usher in a period of happiness in Europe. Battles between Catholics and Protestants dominated much of the centuries that followed. The Thirty Years War claimed 8 million victims, and wreaked massive destruction on a wide swath of Europe. The Vatican is still looking to reclaim its lost Protestant sheep. Luther stood up to top-down governance, a micro-managed theology, and the corruption of the Church of his day. Today, Protestants seem to suffer from too little, rather than too much theology; have splintered into a gadzillion groups that seem to differ – at least seen from the Jewish vantage point – about the nature of the governance they are not supposed to have in the first place. And they have found, at times, new places for corruption to vest.

We Jews, of course, have our own reasons for disliking Luther. He first spoke with strong disdain against the horrific way in which Jews were treated. In 1523, he wrote:

If I had been a Jew and had seen such dolts and blockheads govern and teach the Christian faith, I would sooner have become a hog than a Christian…If the apostles, who also were Jews, had dealt with us Gentiles as we Gentiles deal with the Jews, there would never have been a Christian among the Gentiles … If we really want to help them, we must be guided in our dealings with them not by papal law but by the law of Christian love. We must receive them cordially, and permit them to trade and work with us, that they may have occasion and opportunity to associate with us, hear our Christian teaching, and witness our Christian life. If some of them should prove stiff-necked, what of it? After all, we ourselves are not all good Christians either.

But like Mohammed before him, his love for Jews proved fleeting and instrumental. He hoped that by undoing some of the corruption of the Church, Jews would see the light, reject their superstitions, and accept the True Faith. When that didn’t happen, he (like Mohammed) turned on them. In On the Jews and Their Lies, Luther wrote:

Their synagogues and schools be set on fire, their prayer books destroyed, rabbis forbidden to preach, homes razed, and property and money confiscated. They should be shown no mercy or kindness.

Those words stuck. They were not the first (or last) Christian words of profound anti-Semitism (John “Silver-Tongued” Chrysostom’s deplorable expressions were far more elegant), but they inflamed crowds for centuries thereafter. And that cost us many, many Jewish lives. Some of Luther’s suggestions concerning the Jews had to wait for Hitler for full implementation. While scholars debate whether Luther’s writings directly affected the Holocaust (pro-Nazi Lutheran pastors in Germany often quoted him), there is a consensus that the four centuries of Germans familiar with Luther’s positions paved the way for the popular acceptance of the Final Solution.

When viewed through a Jewish lens, history always yields things to think about. Sometimes they are just interesting observations. Sometimes they offer lessons for the future, or chizuk for the moment . The Reformation is no different. Here are a few. Readers may come up with several more.