The Chofetz Chaim and the Eclipse 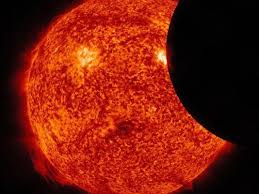 Thanks to a prominent US rabbi who wishes to stay anonymous, Cross-Currents is pleased to offer a translation of the Shmuel Pliskin article on the Chofetz Chaim’s reaction to a solar eclipse that he knew was going to be visible in his community. It is a fascinating read, redolent with the tzidkus of the Chofetz Chaim. [Thanks also go to Josh Flug of Boca Raton for the clever research that led to the conclusion that the event described in the article took place on June 29, 1927.]

It was a regular summer evening, broiling, a Tuesday night. The Chofetz Chaim, the elder, had just completed saying Aleinu. After he placed his siddur down on the table, he surveyed the crowd that had gathered in his narrow room for the Maariv prayer, and then finally tapped on the edge of the table and began to speak:

When the government sends a new ruler to the city, his predecessor knows that his time to leave is coming, he may still be the ruler, but not for much longer …

And behold the little children who are recently born, their [presence] reminds us that we should not [subconsciously] think that there exists an exclusive “group of people that will die” [a chevra of dead men] — it is the fate of all men to die — he is not an eternal creation.

Hashem — Blessed be He — established within the natural order of His creation a solar eclipse [lit: a stricken sun] to counter the errant ones (the sun worshippers who believe that a divine power abides in the Sun). A time comes and the sun is stricken, diminished so that they shall know that the sun is a creation and not a creator! — And also with man we see the same.

And the whole crowd slowly leaves the narrow room, breathing into their lungs, the refreshing air of the chilly night, and they are conversing regarding the solar eclipse that will take place in the morrow.

Like lightning, the knowledge spreads, in every home they are relating that the Chofetz Chaim has declared “it is a mitzvah to see” how the sun shall be stricken tomorrow…

They are looking for broken shards of glass; a cheap purchase ostensibly, that should be easily obtainable (lit. rolls to your feet) — however not at a time of solar eclipse — this is a privileged purchase that simply cannot be found. And the elaborate production of the blackening of the broken glass shards by the light of the candle has commenced.

And it was evening and it was morning on the fourth day. With dawn, it appeared to be a regular morning like everyday, but nevertheless — so different than always. Never was the street so awake, bustling with life at such an early hour like today — the whole city old and young — on its feet.

And the sun marched on its normal, pride-filled course, it burned with strength on the heads of the men that gathered, on the market and on the green treetops that are shaking, on the horizon.

The sun penetrated that narrow room, it poured light on its floor, like golden sand, sparkling underneath the venerable one. Though he wore shoes, it was like carpet to his feet, the Chofetz Chaim who is sitting on his chair, with his hands and muscles wrapped in straps of tefillin, straps that connect his hand to his heart and his heart to the [tefillin] knot on the head ….

“He who forms light and creates darkness” ….

And how strange now have the shadows become, shadows of light , that roll around the feet of the venerable one.

And [the sun’s] clarity, its blinding white light [lit. Alabaster] has been turned to redness, redness that gains strength, like the whip that strikes a deep wound in its midst, a grave wound.

The giant sphere of the sun in the midst of its flowering adolescence has been suddenly struck down — a cheerful life, its youthful days ever shortening….

(The author continues with the metaphor of the sun’s death) The snorting sound of the deathly ill old man can not be not heard, no! The mighty sound of the massive blood spillage is deaf to the ears. The livestock and the cows in the field are afraid; Darkness! All the while, the eyes of men sparkle from happiness and satisfaction

Here and there, groups are gathering — on the ledges and the bridges. From behind the blackened glasses across to the stricken sun which is darkened halfway — the redness

Also right next to the Yeshiva building, the bochurim [young single men] are standing gazing upwards. Behold, in the corner, by the cherry tree, whose white blossoms have also now reddened, stands Rav Naftali [Trop], the Rosh Yeshiva of Radin, and he looks from behind his darkened glass shards with deep eyes, sunken into their sockets, his fist is closed and shaking, with his big thumb, he explained to those that are close —- “we don’t simply look we must gaze”

The mashgiach can be seen leaving the Yeshiva building with hurried strides, with alacrity he takes the glass from the hand of one of the bochurim who hands it to him, and he stands, ready to peer deeply….

And there surrounding the venerable one, around the Chofetz Chaim is gathered a large group.

He started his day early and he prayed Shacharis with the community at an earlier time than all other days; Around him stood those who davened in his minyan, in anticipation, with the intent maybe one of them shall merit and the Chofetz Chaim will use one of their pieces of broken glass to look [at the eclipse].

….Except that Yitzchak, the black bearded one, preceded them. An energetic and well well thought out type, he exhibited many acts of courage and strength in his life; When he was young, he had left his mother and father, [the latter was a Rav in the city V… in Red Russia] and he escaped; he who understood how to deal with the men of the Soviet borders, had already prepared for the Chofetz Chaim, a special triply thick, darkened pair of glasses which properly fit the good and trustworthy eyes of the holy and vaunted elder.

The righteous one does this [looking at the eclipse] with holy trepidation, exactly as he would silently gaze at his chanukiah, from it he does not remove his eyes so long as there are sparkling remnants of oil…

And the courtyard of the yeshiva entirely is turned into an observatory, except that there, they simply “look” from behind a telescope, while here they “gaze” with supple eyes behind primitive glass shards….

And behold the darkness has eclipsed the entire sphere, as if a large well of ink has spilled and filled the space … a strange darkness, not that of the twilight nor even like the thick darkness of night …

Behold, a black curtain has been stretched on the face of the Sun; there remains not even one red streak

And behold the Wonder : –

Behold, behold, once again, born is the new sun — like the six days of creation

But not at one time — like a train it grows slowly, like a baby that develops — a red thin narrow streak emerges, it widens more and more, the red streak grows and grows …. and soon the light pours out from the center, a redness [that portends] the signs of life, of the blood that circulates in the veins…
and the cherry tree once again receives its white flowering and the cattle in the field are more confident, and the bird in the sky flaps its wings with greater confidence, still mixed with a small amount of fear. And the men, small creatures sparkle with their pleased and satisfied eyes …

Slowly, slowly, its redness turns to a clear and strong light — the sun in its power.

And the Chofetz Chaim, the venerable one, sits and rests a bit on the chair they had brought out for him by the door of the house.

He rests, and a deep silence envelopes him — step by step, the elder returns to his house and after him R. Mendel, his son-in-law, and escorting them from behind is Yitzchak the black bearded one, who carries the chair upon which the Chofetz Chaim had rested [back] to the house. And the venerable one, who is completely pure and holy, stops once again by the side of the simple wood table which is in the middle of the room — he utters orders a joyous cry with an expression of victory:

Now all have seen that the sun is nothing more than a creation!