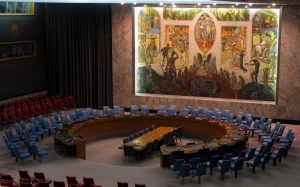 Please click on the link below to access a PDF of a letter from Rabbi Zwiebel, Agudath Israel of America’s executive vice president, to Ambassador Haley.

On behalf of the leadership and constituents of Agudath Israel of America, the national Orthodox Jewish organization that I serve as executive vice president, I wish to commend you for your courageous and principled stance on Israel.

Your recognition of the adversarial attitude of elements of the United Nations toward Israel, and your repeated calling out of the same, constitute a refreshing breath of fresh air in the long polluted geopolitical atmosphere of Turtle Bay.

Your recent strong and pointed address to the Human Rights Council, in which you straightforwardly denounced the Council’s indefensibly negative focus on Israel, and the indiscriminate blacklisting of Israeli companies, is particularly appreciated.

Also appreciated is your demand that “Agenda Item Seven,” which you accurately characterized as “the scandalous provision that singles out Israel for automatic criticism,” be dropped from the Human Rights Council’s list of priorities.

Your well-deserved reputation as a person of character and principle has only been enhanced by your words and actions in your current role representing our country in the United Nations.

May G-d give you continued strength and wisdom, and may you forge on to help foster a world where ugly hatreds will be mere embarrassing relics of an ancient past.