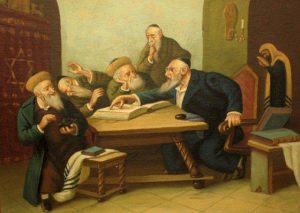 And so the pilpul chaverim — and chaverim we are and will always be — goes on!

But this will, bl”n, be my final posting about the much discussed (b”H) open letter about Torah and politics.

Thank you, R’ Yizchok (Adlerstein) for your kind words about the letter’s authors and commitment to principle.

And for being “entirely on board” with the letter’s “most important” point, that, in your words, “it is both wrong and unhealthy for the Torah community to appear to have accepted the gospel of any particular party.”

But that was not the letter’s “most important” point. It was its only point.

I know you (and others) perceived the letter to be aimed at the president. It was not. It described some of the ugliness that has permeated politics over the years, and, undeniably, much of it has been exacerbated by Mr. Trump and some of his talk-show host defenders over the past four years. But referencing it was not intended to dissuade anyone (as the letter declares explicitly) from voting for any candidate. It was intended only to demonstrate how low things have sunk.

A sentence in the letter, you write, that bothered you was: “The integrity and impact of what we convey to our children and students about kedusha, tzni’us, emes, kavod habriyos and middos tovos are rendered hollow when contradicted by our admiration for, or even absence of revulsion at, politicians and media figures whose words and deeds stand opposed to what we Jews are called upon to embrace and exemplify.”

The sentence does not, however, as you seem to have read it, suggest rejecting any candidate with an offensive personality but rather rejecting “admiration” for him or her. That is a distinction with a, as they say, humongous difference.

So to everyone: Vote for whoever you feel is the best person to lead the free world. But, whoever that might be, don’t extol him as a person. For the sake of your children, your friends and yourself.