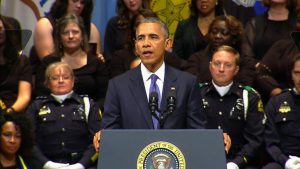 It’s a truth not universally acknowledged that good can come from bad. As Iyov said, “Who can bring purity from impurity, not the One?” (14:4; see Targum Yonasan).

An untruth almost universally asserted is that race relations in the United States are in a hopeless state. Although Jim Crow laws days lie more than a half-century in the past, Americans of all shades live and work side by side and “racist” is an insult, according to a recent New York Times/CBS News poll, fully 70% of Americans say race relations in the country are generally bad.

Recent events – more police killings of unarmed black men and the murder of five white policemen by a black militant – might seem to support that dire contention. But, ironically, the shock of all the bloodshed has evoked something heartening.

The recent police killings of peddler Alton Sterling in Baton Rouge, Louisiana, and of Philando Castile during a traffic stop near St. Paul, Minnesota, angered many blacks (and whites). They were only the latest in a list that includes Michael Brown, Eric Garner, Walter Scott, Freddie Gray… and others.

And yet, unlike in some times past, the many protests of the recent killings were free of violence – at least until the police keeping order at a Dallas protest came under a sniper’s fire.

(TRIGGER WARNING: If positive words about President Obama are disturbing to you, you might wish to stop reading here.)

At a July 12 memorial in Dallas for the murdered officers, Mr. Obama spoke eloquently and pointedly.

He first addressed those who “put on that uniform” and answer calls “that at any moment… may put your life in harm’s way,” and who “don’t expect to hear the words ‘thank you’ very often, especially from those who need them the most.”

“Despite the fact,” he continued, speaking now to the larger crowd, and the nation, “that police conduct was the subject of the protest… these men and this department did their jobs like the professionals that they were.”

And the “targeting of police by the shooter,” he said, was “an act not just of demented violence, but of racial hatred” against whites.

“When the bullets started flying,” he then recalled, “the men and women of the Dallas police… did not flinch… Helped in some cases by protesters, they evacuated the injured, isolated the shooter, saved more lives than we will ever know… it wasn’t about black or white. Everyone was picking each other up and moving them away.”

Mr. Obama decried those who “paint all police as biased or bigoted, undermin[ing] those officers that we depend on for our safety.” And as to “those who use rhetoric suggesting harm to police, not only [do they] make the jobs of police officers even more dangerous, but… [they] do a disservice to the very cause of justice that they claim to promote.”

Tensions between police and minorities, Mr. Obama declared, come from the fact that “we ask the police to do too much and we ask too little of ourselves.”

“That’s what we must pray for,” the president said. “A heart open to the fears and hopes and challenges of our fellow citizens.”

Hate hasn’t died, he admitted. “We know there is evil in this world.” And, in fact, it wasn’t long before three more police officers were killed and three others wounded by gunmen in Baton Rouge, an attack Obama called “cowardly and reprehensible.”

But Americans, he asserted, can decide that murderous racists “will ultimately fail” and “not drive us apart. We can decide to come together and make our country reflect the good inside us.”

Alton Sterling’s 15-year-old son gave a speech of his own, a week after his father’s needless death. He begged the public to come together “as one united family.”

“You can protest,” he said, “but I want everyone to protest the right way. With peace. No violence – none whatsoever.” His mother called the Baton Rouge attack “despicable.” Protest groups felt compelled to distance themselves from the violence.

Only time will tell if recent days will prove to have been a watershed in the troubled history of race in America, or if even any lasting good at all will emerge from all the recent bad. But the words of a president and a bereaved teen and his mother provide some reason for hope.