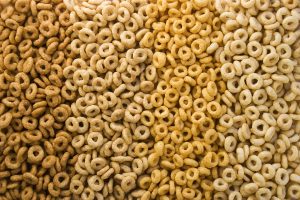 The custom of avoiding kitniyos (legumes – and others!) on Pesach survived a rocky start, and the smirks of our Sephardic brothers and sisters. Survive it did, and never have so many been so meticulous in avoiding as many products suspect of bearing the taint of kitniyos-inclusion.

Support for the practice (or at least one of the reasons given for the evolution of the practice) comes from an unexpected source. Cheerios was always an oat cereal, and oats have long been identified with שבולת שועל[1], one of the five grains that can become chamtez. Oats are gluten free – which is important to many people, especially those allergic to the substance that glues (hence the word gluten) particles together to form a cohesive dough. Until recently, however, Cheerios did not boast of being gluten-free. Here is how the folks at General Mills explain why they have only recently laid claim to that distinction. I quote:

Many farmers who grow oats rotate their crops.

That means they also grow grains that have gluten (like wheat, barley, and rye).

These grains get mixed in with the oats during harvesting and transport.

To make Cheerios gluten‑free, we have to separate them from the oats.

Even today, apparently, grains get mixed with other grains, both in their growing (in the case of legumes, not through rotation, but as crops grown between the rows of grain) and in their transportation. All the more so when grains (and legumes) sold in quantity were brought home in large sacks, emptied, and reused. (One of my guests reported that a gourmand friend had mentioned recently having to pick out grains from his store of lentils!)
Of course, we don’t need the knowing smile from the Cheerios people. We understand why Klal Yisrael – both Sephardim and Ashkenazim – have frequently gone to great lengths to distance themselves from chametz. The sheer seriousness of the offense (i.e. the penalty of kares/excision for its consumption), coupled with awareness that chametz symbolizes the yetzer hora/ Evil Inclination itself, provided ample motivation for people to anathematize anything resembling chametz, going far beyond the requirements of raw halacha in other areas.
Hat-tip (Borsalino, only) to Akiva Adlerstein for providing the link

[Note: It has been brought to my attention that Rabbi Elli Fischer did a far more extensive treatment of the same Cheerios announcement several days ago in Mosaic Magazine. It contains fascinating material about differences between prevailing forms of agriculture in Ashkenazic and Sephardic countries in the time of the rishonim.]

[1] At least le-chumrah. This is not the place to consider the work of Prof. Felix and others before and after who cast doubt on the designation.