When In Rome, Do as Abaya and Rava Do 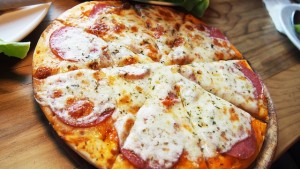 Certain that our loyal readers wanted more details about the New York Times story on the project to translate Shas into Italian, Cross-Currents’ team of investigative reporters set out to get the inside scoop. Which essentially meant speaking to Donato Grosser in Flatbush, and my beloved uncle, Dr. Yossi Adlerstein.

Both reportedly ate pizza before gefilte fish, having been raised in Italy. (Actually, I have no idea if that is true, but Americans would not really respond to an article about Italy without at least one mention of pizza.) Besides the culinary link, both possess other qualities associated with Italians, like speaking really fast.

More importantly, they both know how to learn. Donato, in fact, is responsible for one of the masechtos: Yoma.

After speaking to both, here is what we glean from what is going on:

There are about 60 people working on the project. Unlike some other communities in Europe, Italy still has young people, although not very many who are yeshiva trained. In fact, one of the unstated goals of the project is to stimulate more learning in Italy, by creating a core of people who will use the text to deepen their appreciation of Shas, and then hopefully snowball a love for Torah study across a broader swath of the community.

There are about 30,000 Jews in Italy, which makes it a small community. Another goal of the project, therefore, is consistent with the instructions of R Yisrael Salanter a century and a half ago. R Yisrael thought that translating gemara into the vernacular would lead to more respect for Jews and Judaism by non-Jews. The current project also seeks to burnish the image of Torah among contemporary Italians.

The translation will not yield another Artscroll. For one, the group working on the translation is of uneven training, with very few having yeshiva credentials. So the commentary will not have the lomdus of Artscroll. It may excel in other areas, like graphics.

While the Times article did not mention them, other translation projects are poised to translate Shas into other languages as well. So far, BH, no one has announced plans to divide up Shas into 140 character tweets.