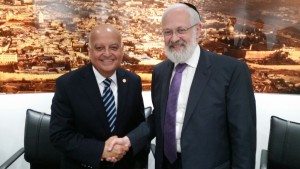 You’ve got to watch out for those haredim. They are going to take over the Jewish world, if you don’t stop them. We’ve just learned of another stealth target of theirs – Israel’s Supreme Court. People have been vigilant enough to prevent them from turning some justice into a baal teshuvah, G-d forbid. (Actually, three of them are already frum). That did not prevent the haredim from doing an end run around the defenders of secularism, by making a bee-line for someone the Tel Avivians would not have suspected. Here is the story:

Salim Joubran delighted the group invited to a reception earlier today at the Israeli Consulate in Los Angeles. The group was composed of roughly equal parts of community leaders, law profs, and rabbis of various stripes. The common denominator is that they all knew about the penchant for Jews to speak too long. Justice Joubran, however, being an Arab Christian, quickly sought to distance himself from that particular Jewish malady. “As Henry VIII once told one of his wives,” he began, “Don’t worry. I won’t keep you too long.”

As a permanent member of Israel’s Supreme Court, Justice Joubran did a quick-and-dirty tour of the Court, and how it differs from the USSC. He quickly gained the sympathy of the crowd by comparing the case load of the US court (about 90 cases a year) with the 9000 a year in Israel. He touched on many important points: access of the Court to any citizen whatsoever, even (in certain cases) as the court of first – not last – recourse; judicial activism; appointment of justices by committee, rather than by political nomination; the Basic Laws serving as a kind of constitution. The presentation was lean, mean, and professional.

He then moved to the personal side. His family fled the fighting in ’48. Remarkably, they were able to return from Beirut in ’55, through the intervention of Jewish coworkers of his father, who pulled strings for the family, despite their residing in a country still technically at war with Israel (as it remains today.)

Fast forward to Hebrew U law school, which is when the haredi plot was hatched. He shared a room with another student in a frum neighborhood – Sanhedria. In the same building were three talmidim of Chevron. They had never gotten that close to an Arab before, and were intrigued by him. They asked him to teach them Arabic. He agreed, if they would introduce him to Jewish law. In his own words, “They taught me Bava Kama, Bava Metzia, and Bava Basra.” This would prove to be important to his position (and his expertise in criminal law in particular), because in 1980, Knesset passed a law changing the procedure of the Court when it found legal principle to be less than compelling on a given issue. Before the legislation, British common law would take over in such a case. The new law specified that Jewish Law should then be searched for its contribution. (Today, he uses the Bar-Ilan database to access that contribution.)

He did well at Hebrew U, and became a favorite of Menachem Elon, himself a former talmid of Chevron, who in time got to the Supreme Court himself. But his relationship with the three talmidim was close enough, that he responded affirmatively when they asked him for a favor. As a Maronite Christian, he secured Jordanian permission to cross over through the Mandelbaum House to the Jordanian-controlled sector (this was before the Six Day War in ’67) in order to visit the Christian shrines. They asked him to stop at the Kotel and insert a kvitel in the Wall. He did – and was immediately seized by four Jordanian policemen, who accused him of being a spy. They viewed placing a piece of paper in the Jewish Wall as an obvious attempt at espionage. He tried explaining that he knew there was an old Jewish practice of inserting a prayer in the Wall, which would then be answered. Fortunately for him, one of the police was an Armenian Christian who confirmed that he had also heard of such a practice, and they decided that he was not a spy.

He lives in Haifa in a building shared by Jews, Christians and Muslims. All live together, he says, in mutual respect and tolerance. (It is so different from other places, that cars on Friday evening routinely detour around the street that houses Haifa’s central synagogue, out of deference to the observant. Since none of his Jewish neighbors drive on Yom Kippur, neither does he!) He sent his children to Jewish preschools before they began Christian schools. He himself grew up with complete familiarity with Jewish holidays and practices. So much so, that he was asked for five years running to sit on the panel to award honor to the best Sukkah of the season.

The three Chevroner bochrim apparently left a lasting impression upon him. But there is always a darker side to upbeat stories like this. He did blurt out that he remembered the yearly Pesach sedarim that he attended, and the holiday season of Pesach – especially the chocolate covered matzah! Now, the last time I checked, all chocolate covered matzah was made with egg matzah, which we of course do not eat. We only permit it to those who are aged or ill.  Could it be that Justice Joubran will lead the Court in the same direction as the Conservative movement which this week moved to discard yet another part of Shulchan Aruch, and officially allow kitniyos to everyone?  Will Israel’s Supreme Court issue a decision contravening halachah, and allowing everyone to eat matzah ashirah?

Forget issues like the core curriculum and the Kotel compromise. This may be the next issue to call for our hand-wringing.