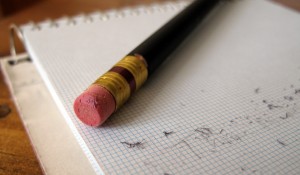 Is it permissible to drink water on Shabbos?

Yes, the question is facetious. But not pointless. Because the parshiyos of this time of year, which deal with the construction of the mishkan and its vessels, are the source of what constitutes a melachah, or act forbidden on Shabbos. (That connection is based on the juxtaposition of the Torah account of the building of the mishkan and the law of Shabbos.)

Still wondering about the opening sentence? Well, if every act done during the mishkan’s building constitutes a melachah, isn’t it reasonable to imagine that those engaged in the construction occasionally drank some water?

You’re right. Neither, though – at least at first thought – is making a mistake.

And Chazal assume as a matter of course that mistakes were made during the mishkan’s construction. That is why the mishnah in Masseches Shabbos (73a) includes mocheik, or “erasing,” the sister-melachah of “writing.”

Writing was used in the hakamas hamishkan, the Gemara explains, (ibid, 103b) to ensure that the kerashim, the gilded wooden beams used for the structure – which was dismantled and rebuilt repeatedly – were inscribed with letters to indicate which beams were to be placed where.

And Rashi, on the mishnah preceding that Gemara, explains that the melachah of erasing derives from the need to correct errors when the wrong letters were mistakenly inscribed on beams.

But when one thinks deeply about errors, one comes to realize that they are in fact essential parts of success. Even when it comes to Torah-study, about which the Gemara says (Gittin, 43a), “[When it comes to words of Torah] one does not stand on [i.e. understand] them unless one [first] stumbles over them.” Every talmid of Talmud knows that well; there is no understanding like that which dawns after having made a wrong assumption.

In fact, mistakes are indispensable parts of even mundane projects, educational or otherwise. No child walks until he first takes an uneasy step and falls. The eventual ability to walk doesn’t come despite the first unsuccessful attempts; it comes as a result of them.

Even when it comes to more complex things like engineering, the path to success leads through a maze of mistakes. Duke University civil engineering professor Henry Petroski captured that truth in the title of one of his books: “To Engineer is Human: The Role of Failure in Successful Design.” Initial failures, he asserts in that book, are what drive any task to perfection.

“An expert,” the famous Jewish physicist Neils Bohr once remarked, “is a man who has made all the mistakes which can be made in a very narrow field.”

The importance of erring informs many areas of life. When I was privileged to serve as a rebbe teaching Gemara, when a talmid would ask what some call a “klutz kasha” – a question based on a misunderstanding, my reaction (at least when I had my wits about me) was, “Wow! You made a great mistake!” And then I would proceed to show how that mistaken assumption clearly led to the question asked, but that it was mistaken, and thus a vital part of the process of truly understanding the subject at hand.

I didn’t call the talmid’s mistake “great” to coddle him or boost his self-esteem (though that’s sometimes not a bad idea). It was an honest assessment.

The world in which we live often seems to embrace an opposite philosophy, where mistakes are often not only unappreciated but not tolerated. Errors are seen as, at best, embarrassments, not worthy experiences. Just – for a timely example – note how presidential candidates handle questions about questionable past decisions, dredged up by media intent on uncovering clay feet.

The pols hem and haw, they justify and deny, they “explain” and, if at all possible, just change the subject. How refreshing it would be were one or two of them to discard the political script and say something radical, shocking and outrageous, like “It was a mistake. I erred and, hopefully, came away from my error wiser.” A perceptive fellow once said that “Admitting a mistake only means you’re smarter than you were yesterday.”

Let’s not raise politicians. Our children, grandchildren and talmidim need to know that to err is not just human, it’s vital.