Of Labels and Fables 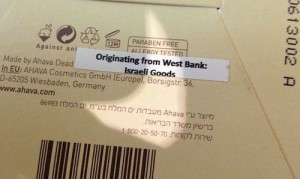 In European Union countries, the words “Product of the West Bank (Israeli settlement)” will now replace “Product of Israel” on labels of foodstuffs, cosmetics and other consumer goods produced by Jewish-owned enterprises in Yehudah and Shomron. Similar labels will grace Jewish products that originate in the Golan Heights and parts of Yerushalayim liberated in the 1967 Six Day War.

In announcing the new policy, E.U. authorities said it was their duty to let consumers know the geographic origin of products so that buyers can make “informed decisions.” The new rule is itself “informed,” and by something more than consumer concern. By anti-Israel sentiment.

The European Union is, of course, entitled to not recognize Israel’s sovereignty over the territories captured in 1967. Our own country, in fact, has also regarded those areas to be under Israeli occupation since that year; Israel herself, for that matter, has never annexed them. Israeli leaders, moreover, including her current Prime Minister, have pledged their willingness to offer Palestinians parts of the captured territory in exchange for an enforceable peace – although, until a nonbelligerent Palestinian leadership emerges, the vision remains hypothetical.

But the labeling law is no mere expression of disapproval of the territories’ unresolved status. It is an act of transparent hypocrisy.

There are territorial disputes in scores of countries. But no products from disputed areas of China, Morocco, Turkey or India, to take only several such nations, are subject to special labeling to “inform” consumers of the conflicts. The reason Israel is being treated differently lies… well, where anyone rational readily recognizes it lies.

The fact alone that the new EU rule came about only after incessant lobbying by Palestinian representatives and a gaggle of “sympathetic” NGOs should suffice to reveal the true agenda at work here. And it isn’t consumer protection. The EU’s contention that its rule is a simple technical correction is a cynical fable.

And the Obama administration’s acceptance of that fabrication is shameful.

A State Department spokesman, Mark Toner, said the EU move is only a “technical guideline,” and not a boycott, which, the spokesman explained, the administration would oppose.

But, he added, “We understand the objective is to provide EU consumers correct information on the origin of products, as required by EU law.” He’s very understanding.

But should he wish to understand the essence of the new rule, he might consider the reaction of PLO secretary-general Saeb Erekat to its enactment. Triumphantly, he lauded it as “a significant move toward a total boycott of Israeli settlements.”

Readers of this column know that I don’t share the common feeling that President Obama is less than fully dedicated to Israel’s security. His actions over the years, I have contended, and still contend, simply don’t support that conclusion. But the same commitment to veracity that impels me to give credit where it is due obliges me no less to criticize the indefensible. And the administration’s declining to condemn the EU rule cannot be defended.

I understand – from Mr. Obama’s perspective as a proponent and would-be architect of a “two-state solution” – the president’s frustrations with Israeli Prime Minister Netanyahu. The recent “bury the hatchet” meeting at the White House was likely more photogenic than factual. And one might reasonably suspect that the administration’s laissez faire reaction to the EU rule was a sort of silencer-muzzled parting shot at what the American leader sees as the Israeli one’s insufficient determination to promote a resolution to the “occupation.”

But differences of opinion about promoting a two-state solution (leave aside who, much more than Mr. Netanyahu, is holding it back) is not the issue here. It’s not Israel’s current Prime Minister who is being marginalized by the Europeans. It is Israel. Mr. Obama should realize that, and he should have called the EU crooked spade a crooked spade, and denounced it as the duplicity it is.

It’s unlikely that administration officials are given to seeing symbolism and irony in world events. But if they were, they might note the fact that, shortly after the EU ruling, the world was rudely awoken to the immediacy of terrorist evil. Parisians and the Western World suddenly got a taste of what Israelis have been enduring regularly – terrorism emboldened by “world opinion.”

And the ground zero, so to speak, of the Paris massacres, the gritty, jihadi-breeding Brussels neighborhood of Molenbeek, which spawned the late, unlamented terrorist Abdelhamid Abaaoud, is a mere 15-minute drive from Le Berlaymont, the building housing the headquarters of the European Union.