When in Doubt… Mesorah 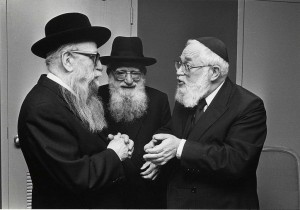 Before confronting Esau face to face, Jacob sent emissaries with the message that begins, Im Laban garti – I have sojourned with Laban and I have lingered until now.

It was true. Jacob had lived (garti) around Laban but he had always remained a stranger, a ger. He had left his childhood home years before and then, as Rabbi Soloveitchik explains, lived “a long night of darkness, misery and distress.”

It is no easy task to live in an environment that is antithetical to one’s upbringing, but Jacob had not “gone off the derech.” As Rashi declares, “I have sojourned with Laban, yet I observed the 613 mitzvos.” Rav Soloveitchik amplifies, “He had not assimilated; he had not integrated himself into Laban’s society and community; he had not accepted their morals, their code of ethics, or their lifestyle.”

As Jews, we face profound challenges as we “sojourn” in this generation. We live in a culture and a society that does not promote or particularly respect that which is essential to our Jewish identity. Sometimes the challenges are obvious. Other times they are pernicious; they “creep up on us” in ways that feel safe and familiar. They become part and parcel of our daily lives – our habits, our vocabulary, the things we see and hear.

While Jacob remained as dedicated at the end of his time in Laban’s house as he was that first night spent on the cold stones of Beth El, we often find ourselves less strong to withstand the ever-present, illusory comfort of the ever more familiar.

With Chanukah approaching, we are reminded of how difficult it is to remain faithful in Galus, for Galus is our reality. How we understand and react to it defines us. For there are no walls tall enough nor moats wide enough to hold it at bay.

At the time of the Hasmoneans, it was not the Greeks who were our greatest threat. The threat was our own assimilation as we became completely – and happily – complicit in the Hellenization of our lives.

Then, as now, the world can seem more attractive than our “antiquated” ways. To our “modern” ears, the culture surrounding us makes more “sense”. Perhaps this sensibility is no more pronounced than in Open Orthodoxy’s call for a female rabbinate. After all, the argument goes, we live in a world where women run Fortune 500 companies; a world where we stand ready to consider a woman as our next President. Women compete in sports. They serve combat missions in war. Certainly Sara’le can become a rabbi, no?

The logic is so seemingly true. How can we stand on the “wrong” side of history?

In fashioning a response to Open Orthodoxy’s call for a female rabbinate, many of my revered and learned colleagues focus on citing sources in Talmud, halacha, and responsa literature as they seek to present a cogent and coherent rabbinic response based on sources. I applaud their efforts. However, let us be clear, the founders of Open Orthodoxy, its leaders and visionaries, are also versed in halacha and all relevant sources. They too sat at the feet of our same great teachers. They learned with Rav Soloveitchik Zt’l, Rav Dovid Lifchitz Zt’l, and the others. They absorbed the same truths we all did. So, with all due respect to my very learned colleagues, at the end of the day, this issue is not simply about halacha.

These arguments are seemingly of no help. For every halachic point made by those who resist the female rabbinate, OO will counter with one they claim is in favor of a female rabbinate. But, in one arena of Jewish experience, an arena which is of equal standing to halacha, OO has no answer.

I close my eyes and try to imagine the Open Orthodox leaders meeting face to face with the Rav and Rav Dovid. I can hear the voice of our teacher as he asks, “Vos tu’tzech? What’s doing?”

“Ma asisa im kol ma shelamadnu? What have you done with all that we learned?”

I cannot speak for those who founded OO but if Rav Dovid was confronting me in such a vision, I would fall to my knees in fear and trembling.

For Rav Dovid would be focusing on the core issue – it is not halacha, it is mesorah.

Mesorah is an equal partner to halacha. Without mesorah, we have no recognizable identity; it is the core of Jewish life and continuity. Moshe kibel torah miSinai, u’mesarah… Rambam lists shalshelet ha’mesorah – one generation after the next – in his Introduction to the Yad. So too in the Igeret of Rav Sherira Gaon. Mesorah is the essential ingredient that makes Jewish, Jewish.

A great historian once asserted that the uniqueness of Judaism is that, were our ancestors of old to join us at the table, or the beis midrash or in shul, they would feel right at home. Same Torah. Same tefillin. Same shechita. Mesorah! This is the gift and responsibility we receive from those who came before us, from father, mother, zeide, bubbe… this is what they have handed down to us.

Without mesorah, we can all be Open – Orthodox or otherwise. We can argue law and practice but to what purpose? Without mesorah Judaism loses its soul and, with the loss of its soul, we will finally be discarded at the outskirts of history.

It is not enough to define oneself as committed to halacha. It is vital to be equally committed to mesorah and all that that means. The vast majority of women in today’s Orthodox community study Torah. In many cases and in many communities, their learning and accomplishment goes far beyond anything we could have imagined. These fine, female scholars seek to become more appreciative of what they practice, to grow spiritually, to be better yiddisher mamas. But not in any manner to undermine our mesorah.

No one, least of all I, dispute the power that women can bring to learning and to study.

It was not all that long ago, in the early and mid-80’s that I not only led the Yeshiva University High School for Girls as principal but I also taught several classes a day. Along with my teaching colleagues, we taught at the highest levels. There was no “watering down” of the content or curriculum. We expected our students to master their coursework and we were proud to introduce textual learning of halacha, and Talmud. We studied Mishna Berura intensely. To say we accomplished a great deal would be an understatement. Our students gained a new and deep appreciation of Torah learning. The results speak for themselves. So very many of my students are now exceptional members of their respective communities. They are outstanding wives and mothers, many professional and highly regarded in their chosen fields, whether law, medicine, the arts, or education. Amongst them are highly-regarded Jewish scholars and teachers, the finest educators in the best Jewish schools. But, to the best of my knowledge, none of them are rabbis, rabbas or maharats; none of them aspired to usurp a role that has been outside the realm of their ancestors. Why would they? Their mothers and grandmothers would not recognize them! And who would want to be alienated from their forebears?

Our mothers, wives and daughters should be expected to be knowledgeable in Torah, halacha and Jewish learning. Our community is strengthened by each of its members being learned and immersed in Torah learning.

To become something other? To become a rabba? A maharat?

This would turn our mesorah on its head! You can be learned, pious, filled with spirituality. But, there are limits. An Yisrael cannot be a Kohen. A woman cannot be a rabbi.

It is not halacha. It is mesorah that allows us to remain Jews.

To live in our modern world is to live in a world of feminism, a world in which fairness and equality is confused with justice, where the temporal is confused with the eternal. It is easy to stand opposed to the RCA resolution, to stand on the side of the press, the loud voices, the “right side of history.”

But we Jews know a little bit about history, don’t we?

Our identity and our brit cannot be so easily changed, not by the call for assimilation or the violence of those who have hated us.

Standing opposed to our transient culture is more difficult. It has always been so. Just ask Jacob.

Only that can keep us from tumbling off the roof and into the chasm.

Rabbi Eliyahu Safran is an educator, author and lecturer. He served in the rabbinate for many years including in Pittsburgh, PA at Congregation Poale Zedeck, as well as in educational leadership positions including Yeshiva University High School for Girls. He served with OU Kosher as Senior Rabbinic Coordinator and Vice President – Communications and Marketing.