Heartfelt Words From the Terror Zone 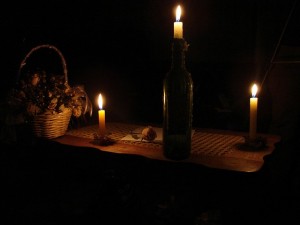 Tel Aviv and Gush Etzion, only a seven minute drive from my place.

Here is one of the 5 Jews brutally murdered today in cold blood because he is a Jew.
I passed by that same spot today.

I am thankful that I am still alive.

I went to sit in one of our cafes in that area to work after meetings. I chose to sit in a nice chilled place called the chamama = eatifida. I sit down and at the table next to me is Ruth Gilis. Her husband was murdered over ten years ago on his way back home from taking care of Jews and his last patient before being killed was actually an Arab in the hospital he worked at. Ever since then, Ruth founded the Pina Chama (a warm hut for the soldiers to take hot drinks in the winter, cold drinks in the summer, eat cookies and cakes when needed during their shifts). About ten minutes later my former high school teacher sat down, too. Her son, Benaya Sarel HY”D, was killed in Operation Protective Edge last summer.

I thought to myself, that this is normal since we live in a tiny country and wherever you go you bump into those who lost loved ones from acts of terror. Your best friends have lost their mother or father, but sadly that is the norm.

It is us and our teeny tiny country that the terrorists want to erase.

We are living in terror.

No, it isn’t simple, but I try to keep myself and my family safe, and the rest I leave up to the One above. He is in charge. We just have to hold on tight and always have faith. It is hard. You can break down. Oh believe me, I do.

Same way I feel of myself and our natio: what are we waiting for? We pretty much are waiting for the Third Bayit to be built. Peace? Humanity?? Terrorism to stop??

That journey can be long. It is long already it feels like forever. But we remain believers because we are that nation. Am Yisrael, the chosen nation. We have to believe, but not everyone does.

Not always do you see or understand that picture since we don’t have all the pieces to the puzzle. But that end result that we are all anticipating for is going to be just amazing and incredible so make sure to keep that string attached and buckled and just breathe. Hashem has those puzzle pieces all ready, it is just a matter of time when He decides to bring down one piece at a time. To just bring us one step closer to the third temple to be built.

We already had so many tears and pain, our hearts have been ripped over and over. We have lost six million during the holocaust, but never again.

We will continue to give one another strength, have dignity, faith and hope. Just never give up.

And thankful for so much more!

Orit Samuels made Aliya in 1994. She and her husband Shlomo are the parents of four children. Orit is a city councilwoman in Efrat, and is a certified hydrotherapist, working with children with special needs.