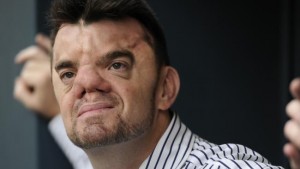 Australian political advisor Robert Hoge was born with a severe facial deformity and describes himself as “the ugliest person you’ve never met.” When he was born, his parents burst into tears.

Mr. Hoge did not allow his disfigurement to prevent him from going about the business of life. In fact, he worked in journalism, a field famously focused on the superficial, and then became a high-profile advisor to former Queensland premier Anna Bligh, the most senior politician in the state.

He describes the attitude that allowed him to overcome his disadvantage.

That truth might seem obvious, but in the contemporary world – and that world’s ills spill into our own machaneh – it is too often overlooked.

And the idea that a single “negative” aspect of a person doesn’t define the person is true not only in the physical realm but, more importantly, if less obviously, in the spiritual.

In the passuk that opens the haftarah of parashas Kedoshim, Hashem declares to Klal Yisrael: “Behold, you are like the children of Kush to Me” (Amos, 9:7). Kush, of course, is usually identified as a region of central Africa. “Children of Kush” would seem an odd simile to use for Klal Yisrael.

The Gemara offers the following: “Just as a person from Kush differs [from others] in [the color of] his skin, so are [the members of Klal] Yisrael different in their actions.” (Moed Katan, 16b).

The Chasam Sofer’s text of the Gemara apparently had “the righteous” in place of “Yisrael.” And, he explains, while every Jew is required to observe all the mitzvos, “there is no single life-path for them all.

“One Jew may excel in Torah-study, another in avodah, another in kindnesses to others; this one, in one particular mitzvah; that one, in another. Nevertheless, while they all differ from each other in their actions, they all have the same intention, to serve Hashem with their entire hearts.”

“Behold the Kushite,” he continues. “Inside, his organs, his blood and his appearance are the same as other people’s. Only in the superficiality of his skin is he different from others. This is the meaning of ‘[different] in his skin,’ [meaning] only in his skin. Likewise, the righteous are different [from one another] only ‘in their actions’; their inner conviction and intention, though, are [the same,] aimed at serving Hashem in a good way.”

A particular G-d-fearing Jew, in other words, may be best suited for a particular area of serving Hashem. He should not be defined by his relative weakness in another area. What matters in the end is his goal, avodas Hashem.

Some well-intentioned parents imagine that their children must follow a particular life-trajectory and land in a specific place. But there are different, equally meritorious, trajectories, and different, equally praiseworthy, landing places for different people. It’s not just that people are dissimilar and will choose a variety of vocations, fields and priorities. It’s that, in our diversity of vocations, fields and priorities, we can all be entirely equal servants of Hashem.

Consider Rav Broka, who, the Gemara recounts (Taanis 22a), was often accompanied by Eliyahu Hanavi. Once, in a marketplace, he asked the prophet whether there were any people among those present who merited the World-to-Come. Eliyahu pointed out one man, who turned out to be a prison guard who made special efforts to protect his prisoners and who had interceded with the government on behalf of his fellow Jews. And then the navi pointed out a pair of jesters. When Rav Broka inquired about the comedians, he discovered that they used their humor to cheer up depressed people and defuse disputes.

Most of us would, understandably, be put off by the prospect of our child becoming a prison guard or a clown. We rightly wish, and guide, our children to be talmidei chachomim and klei kodesh. But if they express their natures in other ways, we must realize that an abundance of vocations can express what matters most: yiras Hashem.

“Don’t tell kids they’re all beautiful; tell them it’s okay to look different,” writes Mr. Hoge about physical traits. As per the Chasam Sofer’s lesson, that advice is no less worthy in more rarefied realms.