The Latest in Shabbos Tech 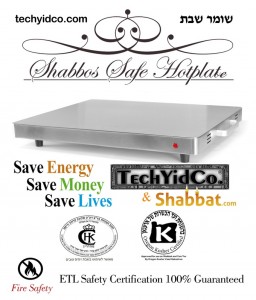 When Ben-Tzion Davis, a Ger Tzedek and self-described electronics nerd, opened a standard Shabbos hotplate to help a friend, he was shocked to discover what was inside. His friend could easily have been more shocked than he was — literally.

Ben-Tzion set out to build a better model, founding a company called TechYid Co. His Shabbos Safe Hotplate uses a safe heating element and has a built-in fuse to protect from shocks or fire if anything goes wrong. This is a brilliant idea — but he needs funding to make his new hot plate a reality, and his KickStarter campaign has only three days remaining. But, on the other hand, he has already raised over $58,000 of the $60,500 he needs.

[UPDATE: He made it. The Hotplate is funded, but you can still pre-order yours.]

So if you use a hot plate and are concerned about the safety of these devices, I urge you to check out the video for his Shabbos Safe Hotplate, and sign up to receive yours.