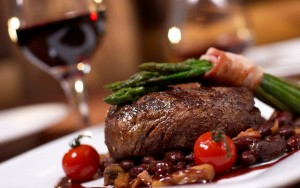 Each year, sitting in the sukkah on the first night of Sukkos, with my wife and whoever among our children and grandchildren we are fortunate to have with us for Yom Tov, I feel a particularly intense elation. Part of it, no doubt, is the result of having managed to erect the sukkah on time. But most of it is born, simply but powerfully, of having so many family members around the table. For many years, though, ironically, my joy also bothered me.

But then, one year, I reached a more refined understanding of simchas Yom Tov. And I’ve never thought about it quite the same since.

The first hint that there was something here to discover lay in Chazal’s description of how we are to fulfill simchas Yom Tov. The Rambam (Hilchos Shvisas Yom Tov, 6:18), basing his words on the Gemara (Pesachim 109a), instructs a man to buy his wife new clothing and jewelry, to give his young children nosherai and to himself enjoy meat and wine. (Before splurging on that special Cabernet, though, bear in mind the Kaf Hachaim’s admonition that precedence here should be given to one’s wife’s pleasure.) So it’s clear that simchas Yom Tov is defined as taking joy in plainly physical pleasures. What gives?

The Sefer Hachinuch on the mitzvah of celebrating Sukkos echoes the oddity. “The days of the holiday,” he writes in Mitzvah 324, “are days of great happiness to Jews, since it is a time of gathering into the house the grain and fruit, and people are naturally happy.”

But then he subtly addresses the issue of how physical pleasures can constitute simchas Yom Tov: “And so Hashem has commanded His people to celebrate at that time, to allow them the merit of turning the essence of the happiness to Him.”

A striking Midrash (cited by Rashi) on a chapter of Tehillim we recite twice daily this time of year, elucidates the passuk “For my father and mother have abandoned me, and Hashem has gathered me in” (27:10). Dovid Hamelech, says the Midrash, was stating that his parents’ focus was on their personal relationship; it was about themselves, not him. In that sense, explains the Midrash, they “abandoned” him.

But stop and think a moment. Dovid’s father was Yishai – one of the three personages who Chazal tell us (Shabbos 55b) “died by the counsel of the nachash,” the serpent in Gan Eden. In other words, he was personally without sin. And yet he is being described as, in some way, selfish?

What occurs is that there is an inescapable aspect of self-awareness (the result, likely, of the nachash’s “success” in Gan Eden) and self-concern that is part and parcel of being human. To lack it is to be an angel. Or, perhaps better, a mere angel. Angels, after all, Chazal tell us, are static; humans, dynamic.

Even the most sublime of human beings have selves. Even the ideal talmid chacham, represented by the Aron in the Mishkan, who is “gold” within and “gold” without, still has a core of wood – a symbol, it may well be, of the Eitz Hadaas, which bequeathed self-awareness in the first place.

And if a sense of self is an inherent part of being a human being, experiencing physical or emotional pleasure at times is normal and inevitable. What the Chinuch may be telling us is that simchas Yom Tov means acknowledging that reality, embracing the pleasure of the harvest – and the joy born of the new clothing and the wine and the meat – but “grafting” it onto the spiritual, conscripting it toward the service of Hashem. By doing that, we elevate the self. We turn the things that make our “selves” happy toward the holy.

What happier moment could be imagined than when Yaakov Avinu was reunited with Yosef after 22 years of not knowing what had become of his beloved son. The Midrash, brought by Rashi, has Yaakov reciting Shema at that moment. Was he not overjoyed at the reunion? Of course he was. But he saw fit to graft his joy onto kabbalas ol malchus Shamayim.

So we should enjoy our meat and our wine, our wives and daughters their new clothes and jewelry, our young’uns their nosh. And we should all consciously try to channel our enjoyment toward its Source.