Ultra-Orthodox Ministers Are Some of Israel’s Best 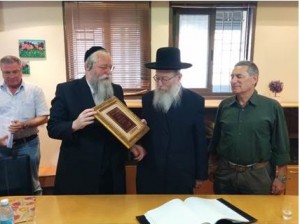 That’s not my headline, it belongs to Ha’aretz. Yes, really!

Ha’aretz columnist Gideon Levy is a member of the hard left — his most recent book is entitled The Punishment of Gaza. But in this article, he not only praises Ministers Aryeh Deri and Yaakov Litzman for their opposition to special interests and service to the poor, but takes aim at the stereotypical view of Charedi ministers (and Charedim generally) “in the eyes of the secular majority.” Most of the article is behind a paywall, but here are some of the most relevant parts:

The two get very little credit from the secular community. Everything they do, even if it’s positive and courageous, immediately triggers a suspicious or hostile response. At best, they’re ignored; they’re rarely applauded.

Compliments for a minister called Yankel [Litzman] or one whose middle name is Makhlouf [Dery]? Never. Their way of life and black clothing prevent secular people from appreciating what they do, even when they deserve it…

Dery? Surely he acted as he did for roguish, self-serving reasons, as usual. After all, he was and always will be a criminal, and besides, he’s of Middle Eastern origin and ultra-Orthodox to boot…

Litzman isn’t one of us. He’s ultra-Orthodox, a Haredi, and Haredim only know how to suck the government dry, not serve in the army. Parasites. There are no other Haredim.

Ha’aretz is better known for op-eds and editorials about the Charedi community of a decidedly different slant, ones that reinforce the stereotypes Levy decries — e.g. blaming the entire Orthodox community for the actions of a psychotic murderer or the suicide of a troubled ex-Chasid. Just recently, an article (by an Orthodox woman, no less, one who went through shidduchim and now helps to make them) criticized shallow men who are overly focused on externals — in the Shidduch world. In an article for the secular community, the average Ha’aretz reader, bombarded by Madison Avenue imagery. I kid you not.

Against that backdrop, the fact that Ha’aretz takes an occasional op-ed from our own Rabbi Shafran is startling enough. Levy is a long-time Ha’aretz columnist and a member of the editorial board; his criticism of secular attitudes towards Charedim breaks ground in suspending some of those stereotypes, and deserves earnest appreciation.

There is a comment to the article from Avshalom Beni, a secular lecturer at an Institute for Animal-Assisted Intervention at Hebrew University. He writes about students in a Charedi program who demonstrate “a profound sensitivity to animal welfare and are proving themselves to be capable and dedicated counselors and advisers.” He concludes:

Ancient Stereotypes die slowly, but once again I join the growing number of secular Jews who are inspired by the will and desire of a growing number of Haredim who are trying to reach out to Israeli society. Thanks to pioneering programs like this one, new inroads are being made towards mutual cooperation and appreciation.

Those familiar with organizations like Hatzalah, Zaka and Yad Sarah, to cite but three of countless examples, know that these are not really new inroads. Jerusalem Post columnist Sam Orbaum once wrote, “the charity, social consciousness, good deeds, communal welfare, and human kindness [of the chareidim] may be unparalleled among the communities of this country.” It is merely that these efforts receive scant coverage.

Acknowledgment of the stereotypes is an excellent step towards reducing them. With the Pew Report showing that the Charedi community is likely to take a much more prominent role in Jewish communal affairs, both in Israel and the United States, it is important that the stereotypes be replaced by honest understanding, and Levy (and Beni) and Ha’aretz are to be commended for their significant positive contribution.