Repeal the Right to Guns? 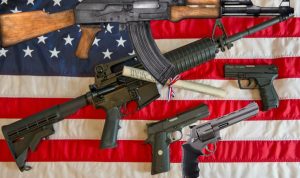 An estimated 1.4 million Americans have died in all the wars in U.S. history, going back to the American Revolution. Approximately the same number of civilian citizens have died as a result of gun shootings – since 1970.

Gun deaths in the U.S. aren’t the result of murders alone, but also of accidents and suicides. In 2016, while 14,415 people died in gun homicides, 22,938 people used firearms to commit suicide.

New Jersey Senator and Democratic presidential candidate (and who isn’t one these days?) Cory Booker has proposed a radical plan to reduce gun violence. It includes a ban on assault weapons, the closing of loopholes that allow domestic abusers to buy guns and, most ambitiously, the creation of a national licensing program that would require prospective gun buyers to undergo extensive background checks by the F.B.I., including fingerprinting and interviews, in order to obtain a renewable five-year gun license.

Sounds draconian. But a 2015 study showed that after Connecticut introduced a similar gun licensing program, gun deaths in the state dropped by 40%.

And it wouldn’t be as draconian – or, at least, not as apoplexy-inducing in some circles – as… repealing the Second Amendment.

Just reading that phrase, in those circles, evokes images of governmental tyranny and persecution of citizens deprived of the means of resistance. And outrage at the unthinkable violence such a move would inflict on a heretofore Constitutional right.

But the Constitution isn’t beyond change – the Second Amendment, after all, is itself an amendment to the foundational document. And if anyone really thinks that owning a gun (or 1000 of them) will protect him from the wrath of a gone-insane, malevolent federal force, with arsenals of tanks and rockets, the crazed fantasist shouldn’t be allowed to own a penknife.

To be sure, repealing the Second Amendment is a long shot. But it’s not an outlandish one. Former Supreme Court Justice John Paul Stevens favors it, and harshly criticized the landmark 2008 Supreme Court District of Columbia v. Heller decision that enshrined an individual’s Constitutional right to keep a gun. Mr. Stevens wrote that “the text of the Second Amendment unambiguously explains” that it was meant to allow for “a well regulated militia,” and was intended only to prevent Congress from disarming state militias and infringing on the sovereignty of the states, not to grant individuals a right to gun ownership.

Another personage, with a similar surname, the conservative columnist Bret Stephens (who, not long ago, helped bring his employer, the New York Times, to apologize, and apologize and apologize, for its inclusion of a cartoon with anti-Semitic imagery), has also advocated for the repeal of the Second Amendment, calling it “a legal regime that most of the developed world rightly considers nuts.”

Washington Times columnist Cheryl Chumley begs to differ, contending that the Second Amendment is verily divine, based, as she contends, “on rights given individuals from G-d, not government.”

How so? Because, Ms. Chumley explains, the amendment “restricts government’s ability to strip citizens from their G-d-given rights to self-protection.”

Indeed, many of us do feel more secure owning a firearm, and guns have been used to protect innocent people. But there are less lethal instruments – like TASERs or pepper spray – that can also be used to defend oneself against an assailant, but which are unsuitable for committing suicide or for the sort of school and synagogue mass shootings that have become, Rachmana litzlan, almost commonplace these days.

Although it’s unarguable that fewer guns in society will mean fewer gun deaths, there may be no point in advocating repeal of the Second Amendment. So far, not even the amount of gun violence that occurs daily has inspired anything more than an op-ed or two supporting such a radical move.

But it’s alluring (and I speak, as always in this space, for myself alone, not Agudath Israel of America) to imagine an America with a mere fraction of its current 393 million civilian-owned firearms.