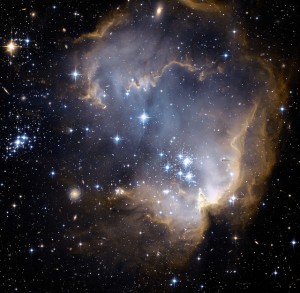 “Are we alone?” asked the oversized headline of a full page ad in the New York Times last Tuesday. “Now is the time to find out,” it answered itself.

The open letter that followed was signed by Russian-Jewish entrepreneur and venture capitalist Yuri Milner and more than a score of astronomers and other scientists. The gist of the missive was that humanity has an obligation to launch “a large-scale international effort to find life in the Universe” – presumably life other than the sort we know here on earth. “As a civilization,” it continued, “we owe it to ourselves to commit time, resources, and passion to this quest.”

Among the resources, as a news story in the same paper and many others that very day explained, will be $100 million dollars of Mr. Milner’s fortune over the next decade.

Parochial a person as I am, I couldn’t help but think about what greater good – at least in my scheme of things – so large a bag of dollars could do, how many yeshivos, Bais Yaakovs and kollelim it could pull back from fiscal cliffs, how many chessed groups it could fund, how many impoverished Jews it could rescue from hardship.

But even from the perspective of a less sectarian observer, wouldn’t a hundred million (yes, yes, I know, $100 million isn’t what it used to be, but still) be better put to terrestrial use?

After all, another Jewish boy who did well for himself, social network creator and billionaire Mark Zuckerberg, has bankrolled schools and hospitals in the U.S. and technological advances in the developing world. And Tesla founder and PayPal co-founder Elon Musk (whose maternal ancestry is not clear) created a foundation dedicated to providing solar-power energy systems in disaster areas.

And Bill Gates (Jewish only in the eyes of some anti-Semites, but he looks Jewish) has had astonishing success battling river blindness and other infectious diseases that afflict the world’s poor.

And George Soros… – well, okay, scratch that one.

One has to acknowledge the good in some billionaires’ dedication to the alleviation of poverty, illiteracy and disease. Seeking to decrease human suffering is a noble goal. Casting about in the cosmos in the hope of finding other species, though… not so much.

Don’t get me wrong. I have nothing against making the effort, as SETI (the Search for Extraterrestrial Intelligence) has been doing (fruitlessly, it must be added) for decades. But to the tune of $100 million dollars that could do so much actual good on this planet? Mr. Milner shouldn’t expect a check from me.

What interests me here, though, isn’t the quest itself to seek intelligent life out there but rather just what it is that motivates accomplished men and women like Mr. Milner and those who signed on to his letter to pursue that quest.

On one level, I suspect that they, or at least some of them, may be whistling intellectually past the beis olam, so to speak, seeking reassurance that we humans are really not so special, and thus that we have no higher purpose than to serve ourselves (and, of course, explore the cosmos).

As Professor Stephen Hawking – one of the letter’s signatories and who in a 2011 interview asserted that the idea of an afterlife is a “fairy story for people afraid of the dark” – confidently proclaimed: “We believe that life arose spontaneously on Earth, so in an infinite universe there must be other occurrences of life.”

(A number of which civilizations, it might be presumed, have developed technologically well beyond where we are today and have been searching for us too, although we haven’t gotten the call. Oh, never mind.)

But something else occurs, too, a more generous thought. Maybe the compulsion to find intelligence outside our world is an expression – well disguised but present all the same – of a desire to find ultimate meaning to life.

Maybe, in other words, some of the alien-searchers have done what they could to paint over the innate human sense of the Divine, but have found that even the several coats of paint haven’t entirely obscured the sense that there is something more than this world. So they pursue extraterrestrials they imagine to reside in some faraway galaxy.

If enough of the paint chips away, they may yet come to realize that they were wrong but they were right. Wrong about the little green men, but right that we are not alone.

We have a Creator and a purpose.