Vayeira — Past is Past 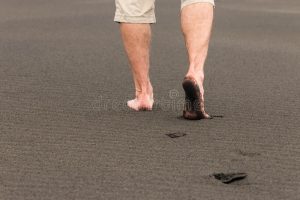 As idolatrous practices go, worshiping the dirt on one’s feet certainly ranks high, along with Baal Zevuv and Baal Pe’or, on the scale of strange.

Yet, we are informed in the parsha of “dirt of feet” idolatry, if in passing, implied by Avraham Avinu’s offer to his three visitors to wash their feet before entering his tent (Beraishis 18:4).

Rashi, quoting the Gemara in Bava Metzia (86b), explains that Avraham “thought that they were Arabs who bow down to the dirt of their feet, and didn’t want to bring idolatry into his home.”

All idolatry is the projection of power onto a creation rather than the Creator, and dedication to that perceived source of power.  What could the dirt of one’s feet represent?

What occurs to me is the possibility that a nomadic wayfarer, like the sort of people Avraham suspected his visitors to be, might view the dirt on his feet as symbolizing where he has been, i.e., his past.  And regarded it as something powerful, to which he is beholden. He is a slave to his history, powerless to shed its influence.

The inclination to idolatry no longer exists (Yoma, 69b), yet some residue of it persists (in the form of things like good luck charms and “worship” of cultural figures).

And if my reading of foot-dirt worship isn’t too outlandish, it might persist today in the feeling that one is confined by the events and choices of his past. While examining one’s past is proper, toward the goal of repentance for bad choices, it is unhealthy to be obsessed by the past, to feel trapped by and unable to escape it. A Jew is meant to live fully in the present, and to have sights on the future.

My most recent Ami column, “The Trivialization of Suicide,” can be read here.