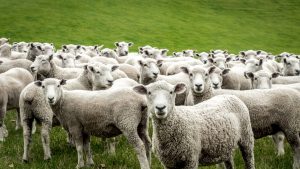 The word “vayehi,” famously, introduces something negative or unfortunate.  Why, then, asks the Mei Marom (the polymath Meshullam Gross), does it introduce the pasuk stating that Avraham “owned sheep, cattle and donkeys” (Beraishis 12:16) – the fact that our forefather had achieved great wealth?

The obvious answer, says Rav Gross, is that, to Avraham, wealth was a burden that could only negatively affect his service to Hashem. In fact, shortly thereafter, the pasuk describes how Avraham was “very laden” with livestock, silver and gold” (ibid 13:2). The word translated “laden” – caveid – literally means “heavy” and implies a burden.

And so, Rav Gross continues, that may explain why Avraham is described in several places (including in our parsha (ibid 12:9) as traveling southward.

Avraham wasn’t a seeker of wealth. On the contrary, he saw it as a burden. He pined for wisdom.

Can one have both? Certainly, and Avraham did.

But, as is clear from Rabi Yitzchak’s contention, one can only pursue one or the other; striving for both is futile. After all, it’s impossible to face both north and south simultaneously.

My most recent Ami column, “Bigotry, Dementia and Persians, Oh My!”, can be read here.