The Charedi Vote Will Fizzle 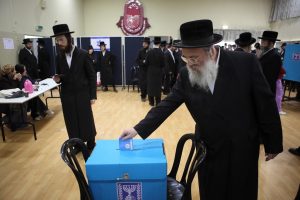 That may be the safest prediction anyone could make – a sign of my cowardice. I will be more than happy to find out that I am wrong. But it has been this way for decades. If Knesset seats followed population growth, charedim should have added three seats every ten years because of its explosive growth, B”H. Instead, representation has remained at about seven, and it might decline to six this time around.

Besides the usual reasons for this phenomenon, a new wrinkle has been added. Anglo-charedim are beginning to behave like Westerners at the ballot box. We’ll have to see if their Israeli cousins are listening.

Not that they really need the example of Anglos to bolt from expected party loyalty. They’ve been doing it for quite some time. Although the charedi community can successfully enforce many kinds of behavior (which quite often is a good thing) through social pressure, its control does not follow people into the voting booth. There, charedi voters often do not vote Gimmel, but for alternatives like Shas and the Religious Zionists – and no one finds out about it.

The silent resisters are one cause for the abysmal record of charedi voting behavior. Another is apathy. Many, many charedim just don’t bother voting. They may assume that the outcome is guaranteed, or they may be fed up with the corruption, the power-grabs, the infighting among the charedi factions. That infighting got so bad that it took Bibi’s intervention to prevent Gimmel from splitting into Chassidic and non-Chassidic parties, which would likely have cost them seats. Those are seats that Bibi is counting on to reach the magic number of 61 for his right-leaning coalition. This possibility looms so large, that a popular Saudi pro-Israel blogger appealed to charedi voters to get out and vote Gimmel, in order to keep the Jewish State Jewish! No one, however, is betting on his appeal accomplishing more than those of respected charedi talmidei chachamim, which have failed to staunch the outflow of votes.

By now, there is another model of voting outside of the designated choices of charedi leadership. (One charedi who questioned a local rov about his right to vote was told, “Of course you have a right to vote. But we tell you whom to vote for!”) Anglo-charedim are doing things differently. In the municipal elections in Beit Shemesh (an Anglo-charedi stronghold) a few years ago, the present mayor was swept into office by lots of charedim. Despite explicit instructions from charedi leadership, they voted for the candidate that they felt would do a better job providing services in the city.

There is every reason to believe that this will continue, and grow. That means a not insignificant number of charedim voting independent of what the “street” demands. Estimates are that there are some 400,000 Anglos in Israel. If, as a rough guess, we use the Aliyah trends of the last decades, half of those would be Orthodox, of some variety. And half of those (at least) would be charedi. One hundred thousand souls includes quite a few voters.

Now, many of those have acclimated themselves entirely to the expectations of the charedi mainstream, and embrace them without hesitation. But a good many have not. They continue to hold on to values and ideas that were part of the more “chilled” practice of charedi Yiddishkeit in the West. They privately – and increasingly, not so privately – feel alienated from the Israeli variety. They are not willing to sacrifice any of their passion for strict adherence to halacha and the primacy of Torah study. But they are not able to accept practices and attitudes that run counter the way that they – all products of charedi yeshivos – understand Torah.

Yitzchok Goldknopf, who will become an MK for Agudah, tells Israeli media not to believe the polls about charedi voting. (Charedim don’t respond to phone polls, he says. The callers arouse suspicions that the party at the other end really works for the Tax Authority). Gimmel’s workers are doing a full-court press to deliver the vote. We wish them well. But ironically, Goldknopf’s own recent statements to the press will likely drive away far more Anglo-charedim than party loyalists will enlist. He has recently opined that: 1) Knowing Math and English has contributed nothing to the Israeli economy in the last twenty years; 2) Non-charedim have run the State for many decades and accomplished nothing. It is time to let charedim run the State; 3) Bnei yeshiva work harder than soldiers in the IDF. These are not the kind of statements that will please anyone with Western sensitivities. And if they are what win over the mainstream charedi “street,” Anglos are going to search for a different neighborhood.

Besides Goldknopf, what irritates Anglo-Charedim about Gimmel? Here is a partial list:

Twenty years ago, Anglo-charedim had no choice. There were two “clubs” within the religious community, and it was a no-brainer that olim with yeshiva background were going to go mainstream charedi. Today, there are enough of the disaffected to start their own club. If their critical mass will not turn out to impact this next election, it is only a matter of time till it does.

May HKBH save us from ourselves, and may we wake up Wednesday morning to minimally learn that, to paraphrase Tricky Dick Nixon, we don’t have Lieberman, Yulia Malinovsky, or Gilad Kariv to kick us around anymore.