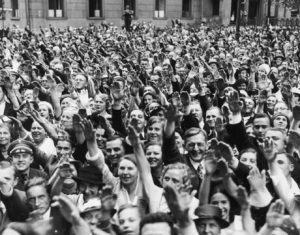 The closest word for “hero” in Hebrew is gibor, often translated as “a strong man.”  And its true definition is provided in the fourth chapter of Pirkei Avos: “Who is a gibor? He who conquers his natural inclination, as it is said: ‘Better is one slow to anger than a strong man, and one who rules over his spirit than a conqueror of a city’ (Mishlei 16:32).”

True strength in Judaism is evident not in action but in restraint, not in outrage but in calm.

In parshas Noach, we meet a very different kind of gibor, a gibor tzayid, a “strongman hunter” (Beraishis 10:9). His name is Nimrod, his goal was power and, as Rashi notes, based on the Targum Yerushalmi and midrashim, what he hunted was human followers, attracting them with braggadocio and bluster.

Nimrod was the first “hero” to harness power in order to, in Rav Shamson Raphael Hirsch’s words, “trap men for [his] own egoistic purposes.” He sought to “subjugate the less strong and clear-sighted, to keep them under his yoke until he would need them…”

As such, Nimrod exemplifies, continues Rav Hirsch, “the evil of tyranny which [has] continued so perniciously through the history of nations.”

And which remains as true today as ever.

And Nimrod was a gibor tzayid lif’nei Hashem, a strongman hunter before Hashem. Explains Rav Hirsch: “[Nimrod] misuse[d] the name of God, cloak[ed] his domination under the show of its being pleasing to God… to demand[ing] recognition of his power in the name of God.”

Indeed, today, too, we daily witness the scowls of scoundrels and liars bent on amassing personal power invoking divine “values” as a means of attracting religious followers who mindlessly regard the  speechifying would-be dictators as “heroes.”

May we be spared such gibborei tzayid.  And merit to see – and be – true gibborim, those described in Avos.

My most recent Ami column, “A Few of My Favorite Things,” can be read here.