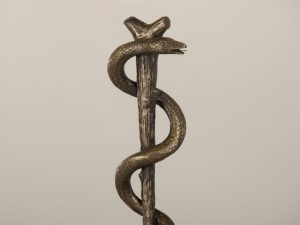 In the only instance of a pun in the Torah (isha from ish doesn’t count), we find Moshe forging the nachash hanechoses, the “snake of copper,” out of that particular material because nechoshes sounds like nachash (Rashi, Bamidbar 21:9). If I am being ordered to make a replica of a nachash, a snake, Moshe reasoned, I will make it out of nechoshes, copper, .

The only problem being that Hashem didn’t command Moshe to make a nachash, but rather a saraf, a “venomous creature” (21:8). The intention was a snake, to be sure, but the pun Moshe used was itself based on a synonym.

No metal in Hebrew sounds remotely like saraf, and so Moshe “translated” it into nachash, which then led him to nechoshes.

A rather complicated linguistic procedure.

Language is the hallmark of being human, and synonymizing and punning are the sort of things that put human communication into an entirely different universe from the animal sort. A bee can dance information to its fellows, and whales can send greetings to one another over great distances, but words, and playing with them, is something uniquely human. It is the province of a qualitatively higher realm of aptitude.

And it exists in tandem with another singularly human ability: to recognize our Creator and what we owe Him. The first rain, without which nothing could grow, needed to await Adam’s arrival and recognition of the “goodness” of Hashem’s gift from the heavens (Rashi, Beraishis 2:5).

The copper snake, meforshim explain, served to inspire those gazing upon it to recognize how they had, until that point, been protected for all their years of desert-wandering from the snakes, and other dangers, ubiquitous in such arid places.

Might the human uniqueness signified by Moshe’s wordplay be meant to reflect the other fundamental and singular human ability, that of feeling gratitude?

My most recent Ami column, “Gentlemen’s Agreement,” can be read here.

And an essay about the state of religion and state is here.