Why To Shed Tears for the Ukraine 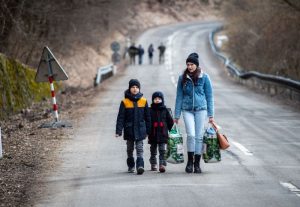 Natan Sharansky got my head and heart to work in synch again, regarding the terrible tragedy unfolding before us in the Ukraine.

It didn’t start off as a dilemma, but as an email a week ago from The Jewish Press’ editor. He’d read pieces strongly urging Jewish support for the Ukrainian people, and others far more hesitant. Would I care to weigh in on the question? Give me Shabbos to think about it, I replied. Not so sure that I had anything meaningful to contribute.

I knew what my heart told me. We were staring at the face of evil, with a decision by a regime without conscience to inflict pain, misery and death on millions of people. Like the fourth beast in Daniel’s prophecy (Daniel 7:7), it was hard as steel, wreaked havoc in its path, and simply trampled anything and anyone in its way. It was not interested in monetary gain, but simply domination – the restoration of its national memory of Russian Empire. How could anyone – especially a Jew – not be moved by the pictures of the dead and wounded children, and the hopelessness of hundreds of thousands whose lives were left behind as they left for a future of complete uncertainty with only a bag in hand.

But then my mind caught up a bit. Reality check. This is the Ukraine we are talking about. The place where so many Jews today carry with them horror stories of the ferocity and cruelty of Hitler’s Ukrainian murderers, while the ordinary people looked on at Babyn Yar while eating ice cream.

A different part of my mind firmly replied. Don’t be silly. This is a new generation. This is a country that voted in Jews as a past prime minister and the current president. That is not something that happens in a country that is fully rife with anti-Semitism. To be sure, there is plenty of Jew hatred left in the Ukraine – in church groups, and in a vigorous right-wing, including Svoboda. (And such Jew hatred is alive and well in Russia.) Jews who have lived in the Ukraine report that they had not encountered anti-Semitism in their own lives, although they knew it was there. Sort of like Brooklyn. Simon Wiesenthal, the famed Nazi-hunter who lost 89 relatives in the Holocaust and had good reason to despise certain groups, always cautioned against imputing collective guilt.

Furthermore, we’ve been there before. The Egyptians of the Bible were not exactly our friends. They visited unspeakable cruelty upon our ancestors, including mass murder. Yet, during the plague of Darkness, when the Egyptians were immobilized for three days, they did not starve. Jews did what Jews always do. They responded to their hearts when they saw pain, and they fed their enemies. (Netziv, Shemos 11:2[1]) Those Egyptians were actual perpetrators – not their grandchildren. If our compassion was moved for them, all the more so for today’s Ukrainians

But yet… Can we just look away from the monuments still going up in today’s Ukraine, to the founding father of the Ukraine, Bogdan Chmielnicki? He murdered a full half of the Jewish population of the Ukraine with particular savagery. Do we ignore that, or do we turn away in disgust? Do we allow the many pogroms of a little more than a century to recede from memory? While the angels in heaven were silenced from singing songs of joyful praise at the Reed Sea, because human beings were drowning, the Jews who had toiled and suffered under the hands of those Egyptians were not stopped! Perhaps asking people to overlook their suffering runs counter to human nature?

More. The Blood Libel and the Beilis trial in Kiev. The pogroms during the war to establish the Ukrainian People’s Republic, in which 100,000 Jews were murdered between 1918-1921, by all players in the conflict. Were we now observing the comeuppance of an historical enemy by Divine Providence?

Troubled, I punted. I asked two Torah personalities over Shabbos what they thought. Neither one has any hostility to non-Jews in general. To my surprise, they also punted. They admitted that they just didn’t know. So I informed my editor friend that I could not write a piece.

That was a week ago, and so things stayed, until I read the remarkable observation of Natan Sharansky, the long-time Prisoner of Zion, at the sheva brachos for a choson whose parents and brother were killed in a terrorist attack when he was seven. Sharansky observed that there were many nationalities living together in the Ukraine in which he grew up. There was really no difference in the way they were treated, with the exception of one: Jews. If you had “Jewish” inscribed on your identity papers, you suffered terrible discrimination in schooling and employment. Jew meant that you were an outsider. You did not belong.

Then he reflected about recent events:

When I was a child, ‘Jewish’ was an extraordinarily bad word; no one was jealous of us. Today at the border of Ukraine, “Jewish” is an extraordinary word for the best. It describes people who have somewhere to go, and have a whole nation, which is their family, waiting for them outside.

Sharansky has reunited my heart and my mind. I will continue to feel sorrow, pain, and compassion for the millions who are suffering. My special focus will be upon our Jewish brothers and sisters, but with ample room to pray and work for the others. I will focus on the innocents, who are the majority. (The Simon Wiesenthal Center, at which I work, has set up a fund for those who wish to help.) At the same time, I will marvel at the real comeuppance of the Jew-haters, Hashem’s real vengeance: Our roles have been reversed. Mocked, derided, slaughtered for our Jewishness, others watch as that which they or their grandparents hated has become the life-preserver that they cannot reach.

Rabbi Yitzchok Adlerstein writes from Jerusalem, and is the Founding Editor of Cross-Currents.com

This essay first appeared in The Jewish Press