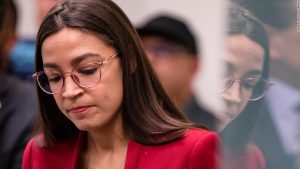 Representative Alexandria Ocasio-Cortez offered an apology last Friday, but it was the wrong one.

She had decided at the last minute to vote “present” instead of “no” on a resolution to provide  $1 billion in new funding for Israel’s Iron Dome missile defense system. And then reportedly had a crying spell after which she expressed regret for not actively opposing the resolution.

Her apology, instead, should have been for having even considered depriving Israel of the ability to protect innocent men, women and children from Hamas rockets.

The measure passed 420 to 9, but the handful of nay- or “present”- sayers showed some true and truly ugly colors.

Back in 2018, I defended Representative Ocasio-Cortez when she was under fire for comments that were construed as insensitive to the memory of the Holocaust. And defended her again, when, with regard to Israel, she was lumped together on no evidence with Israel-hating, antisemitic trope-spewers Representatives Rashida Tlaib and Ilhan Omar.

I had hoped that Ms. Ocasio-Cortez wouldn’t slip into the Tlaib and Omar mud pit and buy into the anti-Israel propaganda that has crazily come to be part of some progressives’ agenda (though not of responsible ones like the impressive Ritchie Torres).

Alas, my hopes were dashed.

She has repeatedly referred to Israeli security measures as “apartheid,” an accusation that distinguished South African Judge Richard Goldstone, who was charged by the U.N. Human Rights Council to lead an investigation of Israel/Hamas hostilities in 2008-2009, dismissed as defamatory. “In Israel,” he wrote in The New York Times, “there is no apartheid. Nothing there comes close to the definition of apartheid.”

And, after this past May’s Hamas attack on Israel, after which the Jewish state dared to retaliate by destroying terrorist bases and tunnels (and taking precautions to protect noncombatants that are unparalleled in any other military), Congresswoman Ocasio-Cortez blasted Israel for its “disproportionate” response, since there were more casualties, overwhelmingly terrorists, in Gaza than, thankfully, in Israel.

All that was emetic enough.  Now the congresswoman is weepily apologizing for not voting to deprive Israel of an entirely defensive weapon.  The Iron Dome system doesn’t threaten people; it destroys rockets aimed at people. And it has done so repeatedly, saving countless Israeli citizens’ lives. If ever there was a no-brainer when it comes to legitimate military assistance, this was it.

The problem is that Ms. Ocasio-Cortez has brains, plenty of them. Her opposition to a measure that can only save innocent lives must come from somewhere other than intelligence. Such irrationality is a regularly observed characteristic of antisemites.

I cannot know if the hearts of  Ms. Ocasio-Cortez or the others who didn’t vote to approve the funding in fact harbor visceral hatred for Jews. But what I can know, based on their votes, is that they have something less than concern for Jewish lives.