NYDN — Antisemitism on the loose 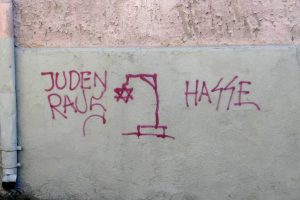 Anti-Semitism on the loose

Goldberg is in the waiting area of a European airport holding the handle of his large suitcase and looking agitated. He approaches one traveler and asks him, “What do you think about Jews?” The fellow smiles benevolently and responds, “They are very fine people.” Goldberg thanks him and moves to another person, asking the same question. The response: “All humans are equal and worthy of respect.” Then to a third traveler; same question, similar answer. Then another, and another. Ditto.

Eventually, though, one of the accosted responds differently. Taking a deep breath and glowering at his questioner, he says, “They’re the scum of the earth, greedy plotters to overtake the world, killers of babies, causers of wars and cheats!”

“Ah!” says Goldberg happily, looking heavenward. “Finally! An honest man!” And then, turning to the spewer of the hate, he asks “Would you mind watching my suitcase while I use the restroom?”

There are indeed regions of the world where the populaces, ignorant and gullible, can be relied upon to swallow and regurgitate the most hateful canards about Jews, and who are all too ready to hate people they’ve never met as a result. But surely not in the Western world, right?

A few items from recent days:

August 19. A school, a synagogue and a bus shelter were spray-painted with anti-Semitic messages in Toronto.

August 20. The Los Angeles County District Attorney charged two former Torrance police officers with vandalism for allegedly spray-painting a swastika on the back seat of a car.

August 21. A man punched a 64-year-old Orthodox Jewish man as they passed one another on the street in the heavily Jewish neighborhood of Stamford Hill. Earlier in the day, the same man punched a Jewish child in the neighborhood. In a separate incident on Aug. 12, a 72-year-old Jewish man was slapped and had his kippah knocked off his head in another suspected hate crime in London.

August 22. Robert Smart, an evangelical Christian who lives in Florida, was outed as a prolific QAnon anti-Semite. He has more than 300,000 followers on Telegram, where, as “GhostEzra,” he posts Nazi propaganda, Holocaust denial and “a slew of conspiracy theories that often range from obliquely to explicitly anti-Semitic,” according to Logically, an organization that tracks disinformation online and uncovered his identity.

An 18-year-old Jewish man wearing a kippah in Cologne, Germany, was beaten by a group of 10 attackers in a public green space and taken to the hospital with a broken nose and cheekbone.

August 23. A man violently slapped a Jewish man in the face, in front of the victim’s wife and five children, at the children’s pool area of an Aventura, Fla., hotel’s resort water park. The assaulter’s wife, according to police, called the victim’s wife a “dirty Jew.”

When, as occasionally happens, I meet a fellow Jew who is convinced that if you scratch any non-Jew hard enough, you’ll find an anti-Semite lurking beneath, I vociferously disagree. I’ve experienced (in addition, to be sure, to my share of Jew-hatred, including both verbal and physical assaults) too many acts of non-Jews’ kindnesses, and known too many good people who don’t share my religion or ethnicity.

And so the joke about Goldberg, I know, is an exaggeration. But perusing the news on almost any given day, I know, too, that exaggerations aren’t fabrications. They may overstate a case to make a point. But the point is often, as it is here, an entirely valid one.

Goldberg may be a joke. But anti-Semitism isn’t.

Shafran, who writes widely, is director of public affairs at Agudath Israel of America.