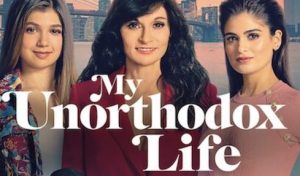 The name Julia Haart evokes different reactions in our community – all negative. Haart is the Kardashian-wannabe-star of the Netflix series about walking out of the orthodox world to reinvent herself as a successful fashion designer who delights in her new-found freedom to publicly mock her previous life in a rigorously insular orthodox locality. (In fact, she never lived the insular life, but gripes about the restrictions practiced by some groups in Monsey, as if she suffered vicariously.) She dumped her husband (apparently a decent guy; she is still on good terms with him), and then went the full limit by marrying out. Maimonides, it seems, is the one part of the past for whom she retained some respect. The great 12th century halakhist and philosopher taught that when one is dissatisfied with some behavioral trait, you must treat it like a tree branch bent in the wrong direction. You have to bend it to the opposite extreme to succeed in getting to the middle point that is your goal. Haart applied that to the value placed on modesty in her previous life, and assiduously tries to go to the opposite extreme at every opportunity.

The worst of it is that she has turned with particular glee to not go it alone, but infect her four children with her values. More like demands, than caring maternal advice. She has succeeded in getting two of them to walk out of observance, and is working hard on the others, the youngest of which still lives and goes to school in her previous locale. She’s very big on pushing exploration of sexuality on her kids, and is encouraging one of her daughters to explore whether she might be a lesbian.

Many of our readers are sympathetic to the plight of those who are no longer observant. We’ve met people who carefully thought through the issues, and found that they could not accept the answers. We disagree with their conclusions, but respect them for their struggle. We’ve met others who suffered a variety of abuse, and are fully sympathetic to their plight, reserving our contempt for the family members, mentors and others who made them suffer, and those who knew and did nothing. Our hearts long for all of them to return.

What makes it harder to understand is that she made her move at the age of 43. The route she took is more understandable for someone in their twenties, with a lifetime of plans and ambitions ahead, and seemingly endless time to enjoy their fulfillment. Who thinks of life at 65 when they are twenty?

What was she thinking? Even an unpredictably meteoric rise to fame would – and did – take time. She is now over fifty. Just how many years did she think she could remain fabulous, before she became irrelevant? People reaching middle age at least begin to think of their mortality, of the shrinking of the time-road ahead of them. She’s on top of her game now. But how long will it last before the bubble bursts, and she tires of her new toys? The true joy that she witnessed – even from a distance in Monsey – of people in their last decades enjoying their children, grandchildren and beyond – are possible for her, but not a very good bet. She doesn’t seem to have the intellectual depth to be a serious atheist, so she will never shake off the doubts that she may have made a pact with the devil, trading her eternity for the ephemeral enjoyment of the moment.

But wait! Julia Haart is beginning to sound like every one of us. Don’t we all trade long-term happiness – and eternity – for the thrill of the moment? Our Sages instruct us to weigh the temporal reward of sin against the infinitely greater reward of avoiding it? Do we stop ourselves often enough to consider what we are trading for and against? Don’t we sell out on our principles, choosing profit and bling over substance? Do our decisions make more sense? Has she done us a favor by presenting to us a vivid caricature of ourselves, through which we can be shocked into making the changes we know we need?

We are all Julia Haart.

May all of us – including Julia Haart – merit a productive Elul, in which we can sense G-d reaching out to us to return. אני לדודי ודודי לי