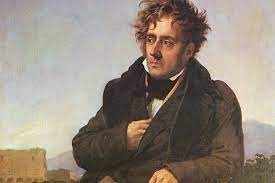 Most people, if they are familiar with the name at all, associate “Chateaubriand” with a meat dish.  But François-René, vicomte de Chateaubriand was a famous French author who died in 1848.  He was not well disposed toward Jews, considering them cursed for the farcical sin of deicide, and wrote approvingly about how “Humanity has put the Jewish race in quarantine.”

And yet, some other words of his are, even coming from so poisoned a pen, more than worthy for Jewish pondering during the annual period of the “Three Weeks” just begun, during which Jews mourn the destruction of the Holy Temples in Jerusalem and the Jewish exile. I am indebted to the late British Chief Rabbi Jonathan Sacks for, in his Haggada, bringing Chateaubriand’s words to my attention.

The French writer visited a desolated Jerusalem, where he saw Jews pining for the arrival of mashiach and the end of the Jewish exile.

And wrote as follows:

“This people has seen Jerusalem destroyed seventeen times, yet there exists nothing in the world which can discourage it or prevent it from raising its eyes to Zion. He who beholds the Jews dispersed over the face of the earth, in keeping with the Word of God, lingers and marvels.

But he will be struck with amazement, as at a miracle, who finds them still in Jerusalem and perceives even, who in law and justice are the masters of Judea, to exist as slaves and strangers in their own land; how despite all abuses they await the King who is to deliver them… If there is anything among the nations of the world marked with the stamp of the miraculous, this, in our opinion, is that miracle.”

And a further miracle, may it come swiftly and in our days, will be the arrival of that king, and the end of our exile.