Parshas Matos: Being There 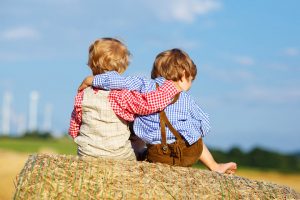 At first read, the tribes of Gad, Reuvein and half of Menashe seem to be making an entirely unreasonable request of Moshe: Let us remain on the east side of the Jordan River, where grazing is widely available for our large flocks of sheep, while the rest of the tribes cross the river and fight the idolaters in Cna’an for possession of the Holy Land.

But two factors need to be taken into account. Firstly, from the moment that the waters of Egypt turned to blood, through the ensuing nine plagues, through the splitting of the Red Sea and the moving well of water and the maan – not to mention the revelation at Sinai – the first years of the Jewish people’s history were rife with miracles.

So Hashem would be the One delivering Cna’an’s inhabitants into the hands of Klal Yisrael. There was no need for the sheep-laden tribes to be involved in the conquest of the land. It could have been taken with only Yehoshua marching in by himself.

And secondly, it was divinely preordained that the land east of the Jordan was intended for Gad, Reuvein and part of Menashe. That is clear from what eventually happened in the end, and there are deep mystical reasons brought in sources for that fact. So why shouldn’t those tribes just stay there?

The questions seem strong but their answer is right in the text, in Moshe’s response: “Shall your brothers go out to battle while you settle here? Why do you dishearten the Jewish people?” Bamidbar 32; 6-7).

The petitioning tribes indeed belonged where they were, and the military campaign indeed needed them not a whit. But their remaining behind would dishearten their fellow Jews. Simply by the lack of their presence alongside them.

All of us readily recognize the powerfully positive value of an encouraging word or act (and, sadly, the destructive power of discouraging ones).

But there is something else that provides people encouragement and strength, and whose absence can deprive them of the same: being there with them.

One doesn’t have to say anything or do anything. But physically being at the side of someone who is facing adversity or tragedy provides them comfort, encouragement and strength. It is a gift of the most wondrous sort.

P.S.  An article I wrote about the widespread misrepresentation of Judaism’s view on abortion appeared in The Washington Post recently.  It can be read firewall-free here.  And my most recent Ami column, about the possible connection between a pasuk in Tehillim and antibodies can be read here.