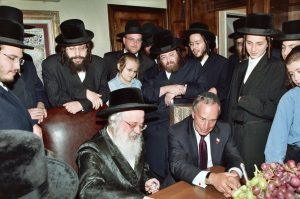 For some of us, double-edged swords don’t come more dangerous than the prospect of a Jewish president. The accomplishment would be heartening in a way, and would say much about America. But the reality of a Jewish person sitting in the White House would not please people infected with the derangement we call anti-Semitism. And we have more than enough of that as is, thank you.

To be sure, unless the current Commander-in-Chief is removed from office (not likely) or the Electoral College is abolished (less likely), the race for the Democratic candidacy will probably prove to be only a contest to determine who will be defeated by President Trump in November.

Still, it is noteworthy – and fear-worthy, for the above-mentioned some of us – that, back in the 1950s, two currently viable viers for the highest office in the land celebrated bar mitzvahs.

Both are ex-mayors: Senator Bernie Sanders, of Burlington, Vermont; and Michael Bloomberg, of New York. The former is a populist progressive backed by a strong grass-roots movement; the latter, a savvy, successful businessman backed by an impressive record and the willingness to spend a billion dollars of his own money on his campaign.

And both are touting their tribal credentials, to appeal to Jewish voters.

“I’ve spent a lot of time in synagogues in my life,” Mr. Bloomberg told a packed Jewish venue in Miami last week, “but my parents taught me that Judaism is more than just going to shul. It is about living our values… and it’s about revering the miracle that is the state of Israel, which – for their generation – was a dream fulfilled before their very eyes.”

In oblique criticism of Senator Sanders’ democratic socialism, he joked that “I know I’m not the only Jewish candidate running for president. But I am the only one who doesn’t want to turn America into a kibbutz.”

Continuing his bombing of Bernie, who has indicated he might withhold military aid from Israel if it didn’t better address humanitarian needs of Gazans, Mr. Bloomberg pledged to “never impose conditions on our military aid [to Israel], including missile defense – no matter who is Prime Minister.”

And, of course, after speaking at length about recent acts of violent anti-Semitism, he attacked Mr. Trump, associating him obliquely, and unfairly, with “racist groups” that “spread hate.”

For its part, the Sanders campaign rolled out its own Jewy video last week, which began with a clip of the senator, at a J Street gathering last year, proclaiming that “I’m very proud to be Jewish, and look forward to becoming the first Jewish president in the history of this country.”

And, although he accuses the current Israeli government of unfairness to Palestinians, he calls himself “somebody who is 100 percent pro-Israel.”

Fighting anti-Semitism and declaring support for Israel may please many Jewish political palates, and, b”H, remain pretty much de rigueur positions for any serious presidential candidate.

But office contenders seeking Jewish votes these days would be wise to not ignore American Jewry’s Orthodox segment. It may be a fraction of the country’s Jewish population (around 10%, it’s estimated) but it is a fraction that, according to sociologist Steven M. Cohen, has more than quintupled over the past two generations, and stands, b’ezras Hashem, to continue its growth.

According to the Pew Research Center, more than a quarter of American Jews 17 years of age or younger are Orthodox. Public policy experts Eric Cohen and Aylana Meisel have estimated that, by 2050, the American Jewish community will be majority Orthodox.

We Orthodox, like most other Jews, are greatly concerned about Israel’s security and about rising anti-Semitism. But, in addition to those issues, a major item on our political agenda is education.

We believe in school choice – that parents are the best arbiters of what schools their children should attend, and should not be financially penalized for not choosing public schools. And we consider it critically important that government involvement in determining the content of curricula in private schools be minimal.

Senator Sanders is officially on what we consider the wrong side of both those issues. Mr. Bloomberg, while he has long been a proponent of educational choice with regard to things like public charter schools, hasn’t taken a public position on either of our own educational concerns.

It’s not too late for him to do so, of course, and, as someone who fundamentally understands the importance of educational options, he might come to see the sense and fairness in our positions.

From a political perspective, it would be wise.

More important, though, from a Jewish perspective, it would be right.