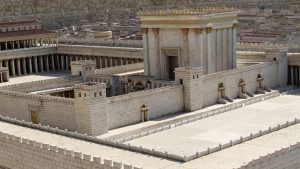 The sun rises in the east.

Gettysburg is where a major Civil War battle took place.

The Har HaBayis is where the Batei Mikdash stood.

Astoundingly, some news organizations seem ignorant of that last truism.

The report had Safadi going on to warn against what he sees as Israel’s attempt to “change the historical and legal status of Jerusalem” – ludicrously oblivious to, or shamelessly obscuring, the site’s actual history.

Of course, one doesn’t expect the People’s Republic of China to care a great deal about truth. Nor should one expect any important context from Al-Jazeera. That network’s report of the clash noted that it occurred on “the Jewish holiday [sic] of Tisha B’Av,” without any explanation of the doleful day’s significance to Jews. And Saudi Arabia’s Arab News, in its reportage, omits any mention of a Jewish connection to the Har HaBayis.

Yahoo News took a baby step further, noting that Jews “refer to [the place] as the Temple Mount” and adding that Jews “believe it was the site of the two biblical-era Jewish temples.”

Yes. We also believe that the Normandy coast was the site of the World War II-era D-Day invasion of France.

Kudos, though, to NBC News for its above-average HIQ (history intelligence quotient). It reported that the “the 37-acre esplanade [that] is home to Al-Aqsa Mosque” is Judaism’s holiest place because of “its history as the site of First and Second Temples.”

And even Reuters, which has something of a history of its own when it comes to Israel reportage, laudably identifies the location as “revered by Jews as Temple Mount, the site of two biblical Jewish temples.”

The Associated Press also gets a high HIQ score, for explaining that the Har HaBayis, while “currently the home of the iconic gold Dome of the Rock and the al-Aqsa Mosque,” was “the site of two Jewish temples in antiquity” and for explaining that “the Ninth of Av [is] a day of fasting and mourning for the destruction of the two biblical temples that, in antiquity, stood at the site.”

UPI, too, earns special mention for its story on the clashes, for referring to the site simply as the “Temple Mount.”

The truthfulness tide turned, I think, in 2015.

On October 8 of that year, The New York Times published a news article about Muslims’ and Jews’ relationship to the Har HaBayis, contending that the question of “the precise location of two ancient Jewish temples, one built on the remains of the other, and both long since gone,” has “never [been] definitively answered.”

A deluge of incredulity followed– including a letter from this writer, who somewhat snootily observed that, “despite Palestinian insistence to the contrary… the central Jewish Temple stood on the Temple Mount nearly 1,500 years before Islam’s founder’s grandparents were born.”

More measured, and authoritative, was a missive from one of the experts whose view had been muddled in the article.

University of North Carolina-Chapel Hill Professor Jodi Magness explained that “literary sources leave little doubt that there were two successive ancient temples in Jerusalem dedicated to the G-d of Israel… These sources and archaeological remains indicate that both temples stood somewhere on the Temple Mount. The only real question is the precise location of the temple(s) on the Temple Mount.”

The Times article was amended the following day, and a correction, echoing Professor Magness’ explanation, was duly published in the newspaper.

We who have been entrusted with preserving the Jewish mesorah – who face the Har HaBayis daily in tefillah, who beseech Hashem to rebuild Yerushalayim in our every tefillah and birchas hamazon, and who bemoan the churbanos in our tefillos Mussaf – have no need for scholarly or archaeological evidence for the historicity of the Batei Mikdash.

But a sweet note arrived just before our most recent observance of Tisha B’Av, when it was reported that archaeologists had just uncovered, in the words of CNN, “evidence of the Babylonian conquest of the city, appearing to confirm a Biblical account of its destruction.”

“The combination of an ashy layer full of artifacts, mixed with arrowheads, and a very special ornament indicates some kind of devastation and destruction,” explained University of North Carolina at Charlotte’s Shimon Gibson.

It’s not likely that historical Jewish provenance of Yerushalayim and the Har HaBayis will be acknowledged any time soon by Xinhua or Al-Jazeera. But the fact that at least some major media have allowed themselves to become better educated on the subject is heartening.

May it be a harbinger that the fulfillment of our entreaty “chadesh yameinu k’kedem” – “renew our days as of old” – is quickly approaching.