The “shul” I won’t attend 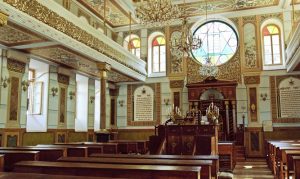 Have you ever attended a movie or other form of entertainment and realized, within moments, that — uh-oh — you are in for a long wasted evening?  And did you then regret not first having read the reviews or at least having asked a friend whether the performance would merit the time invested?

No point in repeating the worn-out joke about the isolated Jew on the deserted island who builds the two shuls (one to pray in and one he can refuse to set foot in…).  Instead, let’s “cut to the chase”:

When you see the mark of the “Orthodox Union” on food, you can be certain that it is kosher.  It is the mark of excellence, the most respected and trusted symbol in the world when it comes to the kosher assuredness of food.  However — WARNING! — when a synagogue in the United States happens to bear the mark of the “OU” be aware that it very possibly may not fit a proper kosher standard.  That’s right: The Orthodox Union name — when it comes to synagogues — is no guarantee that you are walking into a shul that fits the Orthodox standards that you would take for granted.

This information is surprising but, even more, it is perplexing and upsetting, especially for huge demographic communities of “Modern Orthodox” and “Centrist Orthodox” Jews in the United States.  Imagine: Orthodox Union congregations that are not Orthodox.

Several outlier Orthodox Union congregations — really, the word “shul” does not fit these congregations despite their “OU” moniker and affiliation, so it is better to call them “congregations” — publicly defy the halakhic positions published by the Rabbinical Council of America, the National Council of Young Israel, and even the Orthodox Union itself (!). As one example, those outliers have women rabbis.  In doing so, they easily and quickly signal to the larger community their defiance of the stated position of the Poskim (the halakhic authorities) who have weighed in on the subject, and they similarly thereby signal their rejection of classic Orthodox Mesorah (the essential aspect of Orthodox Judaism that centralizes the importance of adhering to established rabbinic authority).

Obviously, women have much to offer the Orthodox world.  For goodness sakes, women comprise more than half the Orthodox world.  And Orthodox Judaism, unlike Reform, gives women the single greatest power in all of Judaism: the power to confer the Judaic religion on a person.  Whereas Reform has seized the woman’s power, allowing the Jewish father to marry a non-Jewish woman and still to have the Reform rabbi call their children “Jewish,” and “bar mitzvah” them, Orthodox Judaism — and all those male rabbis of Orthodox Judaism — stands firmly behind the halakhic roots of Torah, Mishnah, and Gemara that define a person’s religion by the mother.  If the mother is Jewish, so is the child.  That is an example of the woman’s authority and power in Torah Judaism. Period.  End of story.

But we all have roles in Judaism.  I am the rabbi of my shul, but I cannot bless my congregation with the holy blessing that the Torah tells us was spoken by G-d.  Only the Kohen (patrilineal descendants of Aaron the Kohen) have that authority.  Judaism assigns certain mitzvot (commandments) to men, others to women.   Meanwhile, the Kohen is forbidden from marrying a divorcee.  So, a Kohen who suddenly finds himself single in his 40s or 50s or 60s — whether because of divorce or having been widowed or never having married — finds himself severely limited in finding a potential life partner.  That is Judaism, where certain roles are assigned, sometimes by dint of birth.

A small sect called “Open Orthodoxy” now exists in America, stemming from the teachings of a small group of radical left theologians.  Their theology is found in their own separatist rabbinic body, the IRF (International Rabbinic Fellowship), a body that now includes women rabbis.  They ordain their male rabbis at YCT (“Chovevei Torah”), and they ordain their female rabbis at “Yeshiva Maharat.”  Their theology extends beyond the public defiance of Orthodox community norms and standards of halakhic practice.  It extends even beyond theology to politics.

There are “Open Orthodox” rabbis who publish on the internet that Israel is the “occupier” and the Arabs are the “occupied.” When President Obama had his United Nations ambassador abstain in the Security Council rather than veto that horrible resolution at the end of his second term in December 2016, the resolution attacking not only Jewish communities in Judea and Samaria but even denying the special place of Jerusalem in Jewish history and identity, the “Open Orthodox” did not join the truly Orthodox organizations of America in condemning the Obama Administration.  Instead, they remained silent or waffled because they refused to speak out against Obama.

Obama invited one of them to lead a Hannukah program at the White House, and that “Open Orthodox” rabbi used the opportunity to lead the Obamas in singing a church ditty.  (See the link at 8:52)  Another “Open Orthodox” rabbi made a point of bringing his foster child to Santa Claus, and he posted a picture of himself sitting on Santa Claus’s lap, smiling as broadly as any child ever has done when getting to sit on Santa’s lap.  Many of us now call this “Open Orthodox” rabbi “Der Sentaklauser Rebbe.”

“Open Orthodox” rabbis have published attacks on mainstream Orthodox institutions and values in the New York Times, in the Washington Post, Wall Street Journal, in the Jewish Telegraphic Agency (JTA), and in Newsweek.  Among them, some have publicly attacked in non-Jewish media the shechita system in the United States, giving anti-Semites ammunition.  Another published a tortuous opinion that denies the requirement for an eruv that permits Jews to carry outdoors on Shabbat — a perfect ruling for anti-Semitic townships and villages who oppose permitting construction of such necessities for the Orthodox community.

Several of the “Open Orthodox” rabbis are married to women who publicly have told interviewers for published stories that they either are atheists who do not believe in G-d altogether or are ordained as cantors or as rabbis in the non-Orthodox Reform, Conservative, or Reconstructionist “denominations.”  And there are “Open Orthodox” congregations which celebrate “Gay Marriages,” whether with published announcements of “Mazal Tov” or with announcements at kiddush collations after services.  In one particularly egregious case, an “Open Orthodox” rabbi even published in a major American Jewish weekly his endorsement of intermarriages with non-Jews, citing irresponsbily to the Torah’s statement at the time that G-d created Eve as a spouse for Adam that “it is not good for a man to live alone.”  And the only person whom “Open Orthodoxy” ever ordained to be a Dayan (a rabbinic judge) has published often that he does not believe that Abraham ever existed and questions the truth of wide swaths of Torah narrative.

Another “Open Orthodox” rabbi heading an Orthodox Union congregation published his position that Israel should be willing to negotiate to divide Jerusalem as part of a peace agreement.  The same rabbi, truly a sweet guy as a person, published a widely condemned article demanding that parts of the Siddur (Jewish prayer book) be edited and that terminology stemming from the sages of the Talmud be excised from daily morning prayer because he finds it sexist.  His article was so vitriolic in tone, and disrepesectful to the Sages of the Talmud, that he ultimately found himself forced to take down his own article.

Yet another “Open Orthodox” rabbi achieved national news coverage when he announced that he had composed a prayer for reciting every Shabbat, praying for President Trump to fail.  The story was picked up not only by general newspapers in America, but was featured in Nazi publications as proof that Jews are not loyal to the country.  A fitting sidebar to his articles attacking the cruelty of Jewish slaughter as practiced in many kosher slaughterhouses in America.

For these and related reasons, a great many mainstream normative Orthodox rabbis and congregations in the United States, myself included, here in America now reject many, if not most, conversions done by “Open Orthodox” rabbis.  When we meet individuals who present themselves as having been “converted” by any of a large number of them, we do not call such people to the Torah, do not invite them to open the ark, and we may not drink wine from an open bottle that such “converts” have touched unless the wine is labeled “mevushal” (a processing that permits drinking wine with non-Jews).  Thus, prospective converts should be warned, too: If the “conversion” is done by an “Open Orthodox” rabbi, be prepared to find that a great many mainstream, normative Centrist Orthodox and Modern Orthodox rabbis will not accept the conversion, will not conduct a marriage later for such a person if he or she wants to marry a Jew, and will not regard the child of a woman” converted” by one of them as Jewish.

Even as the “Open Orthodox” attack the Israel Chief Rabbinate — writing their attacks in the New York Times and elsewhere in America, demanding that Reform “conversions” be treated woith parity to halakhically proper conversions — we actually cannot accept most “Open Orthodox” conversions as kosher.  We treat them with the parity that they deserve alongside Reform “conversions.”  It is not about politics but about Judaism and Torah theology.  We deeply suspect “Open Orthodox” standards because, sadly, we know too many of them whose standards we absolutely reject — inasmuch as they have rejected the standards of Torah and mesorah.  And the fact that such a rabbi practices alongside a woman rabbi at an Orthodox Union congregation changes none of that.

So, when you buy Heinz baked beans and see that “OU” sign of kosher, trust it completely.  But, alas, do not assume that an “Orthodox Union” congregation is a shul you can trust or that its rabbi meets the Orthodox standard you would exepect.  Most are of the highest standard, but too many are full of beans.