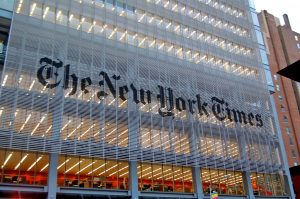 The third one, at least for me, did the trick. The third New York Times apology, that is.

The venerated publication, as most readers know by now, not long ago published an overtly anti-Semitic cartoon in its International Edition.

It depicted a guide dog with a face resembling Benjamin Netanyahu leading a blind, grotesquely overweight Donald Trump wearing dark glasses and a black yarmulke. A magen Dovid dangled from the dog’s collar.

When the cartoon was shared online, it was met with broad outrage. With its Jewish symbols and theme of an Israeli Prime Minister leading an unsighted American president, its Der Stürmer-keit was unmistakable. The Times issued a quick but brief apology – #1 – and then, after a wide and loud public outcry, a more comprehensive one – #2.

Then, last week, came #3, in the form of an unusual “Editorial Board” lead editorial.

When it appeared, Agudath Israel of America had been poised to issue a strongly worded statement about the cartoon, and a subsequent one depicting Mr. Netanyahu descending a mountain carrying a tablet featuring the Israeli flag, taking a picture of himself with a “selfie-stick.”

The ready-to-release statement pointedly suggested that The Times take a selfie of its own, and examine it closely and critically. Since the paper essentially did that, the statement was quashed.

The April 30 Editorial Board offering, titled “A Rising Tide of Anti-Semitism” and representing the view of the highest echelon of the paper, admitted, inter alia, that the first cartoon was “appalling” and that “an obviously bigoted cartoon in a mainstream publication is evidence of a profound danger – not only of anti-Semitism but of numbness to its creep, to the insidious way this ancient, enduring prejudice is once again working itself into public view and common conversation.” [Emphasis mine.] Indeed.

The editorial went on to list recent acts of violent anti-Semitism, to acknowledge that “anti-Zionism can clearly serve as a cover for anti-Semitism,” and to bemoan the fact that “In the 1930s and the 1940s, The Times was largely silent as anti-Semitism rose up and bathed the world in blood. That failure still haunts this newspaper.”

The editorial board statement also admitted that “apologies are important but the deeper obligation of The Times is to focus on leading through unblinking journalism and the clear editorial expression of its values.” And that, while “society in recent years has shown healthy signs of increased sensitivity to other forms of bigotry… somehow anti-Semitism can often still be dismissed as a disease gnawing only at the fringes of society. That is a dangerous mistake. As recent events have shown, it is a very mainstream problem.”

It is a problem that The Times, unfortunately, has helped feed, with its reportage, editorials and op-eds over more recent years, from misrepresentation of the 1991 Crown Heights riots to harsh criticism of Israeli actions of self-defense to repeated, unwarranted criticism of the Orthodox Jewish community.

Late last year, a group of representatives from Agudath Israel and the Orthodox Union met with The Times’ editorial page editor with the express purpose of trying to call attention to the dearth of Orthodox views on the paper’s op-ed page – a wrong compounded by the frequent criticism of the community that appears there.

The editor, who had at first tried to rebuff the charge, did some research and admitted the problem. And he pledged to be more open to Orthodox views.

So far, slim pickings. Although an opinion piece I submitted about Chanukah was published by The Times online, it was a “thought piece,” not a presentation of a position on a contemporary issue. And while ideas for examples of the latter, on topics like yeshivah education and the measles outbreak, to be written by qualified, credentialed members of our community were put forth, they were not accepted.

Does The Times recognize that part of the “creep” of subtle anti-Semitism involves negative coverage of the most recognizably Jewish of Jews, and the vacuum of Orthodox views on its op-ed page? Or has “numbness” set in there too?

It’s easy, even for an inveterate optimist like me, to be pessimistic. After all, there hasn’t been much positive movement to date, at least not visibly so.

But the willingness of the Old Grey Lady to publicly and prominently confess to sins both distant and present, and her pledge to be alert to the “insidious way this ancient, enduring prejudice” of Jew-hatred “creeps” into societal (and journalistic) discourse, and to the danger of “numbness” to that creep, leaves some hope in my heart.

Time, as the truism has it, will tell.