Agudath Israel Statement about Nonsense and Insults at Monsey Gathering 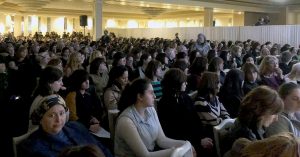 Countless rabbinical figures and leaders, including leading rabbis in the Agudath Israel movement and doctors serving these communities, have repeatedly encouraged vaccination in the strongest possible terms.

A recent gathering in Monsey, New York, heavily promoted in Orthodox Jewish areas, featured figures in the anti-vaccination circuit, including a pediatrician who uses “cranial-sacral therapy, homeopathy, essential oils, aromatherapy, yoga, Reiki, meditation, reflexology, and mindfulness”; a television producer who has sported a large yellow star at anti-vaccination rallies; and the author of a paper in the Lancet on vaccines that the publication retracted as fraudulent.  The latter lost his British medical license for unethical behavior.

Of particular concern to us were assertions made by a presenter speaking as a rabbi, a long-time agitator on behalf of controversial causes.  In the past, the speaker has likened vaccination to “child sacrifice” and, at the recent gathering, he accused New York City Mayor Bill de Blasio of scapegoating Hasidim, being “a very, very sneaky fellow” and of having German heritage.

The speaker also blamed concern over the appearance of measles in Orthodox communities on an effort to “to distract from the virulent diseases that are sweeping through the city from illegals.”

His assertions are nonsense, and his personal attack on Mayor de Blasio is deeply offensive.  It is unfortunate that he was allowed to share his imaginings with others.