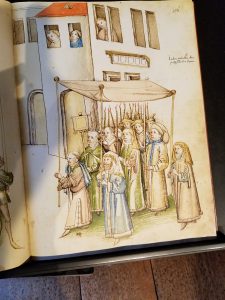 Reaching out and touching the one of the crematoria doors in Auschwitz-Birkenau a few weeks ago was emotionally jarring. Visiting my mother’s home town of Konstanz, Germany, made it personal. My youngest son and I walked the streets that she did on the way to the schools that still stood. We paused at the apartment from which she and her mother were given a few minutes to pack one suitcase, and taken to a collection point to board a train for a journey of over two days to a concentration camp in southern Vichy France near the Pyrenees and the border with Spain. Awaiting them there were bare barracks, used to house refugee soldiers from the Spanish civil war. There was no plumbing, and there were no beds. Nor was there any pavement, while an almost daily rainfall kept the ground maintained as perpetual thick mud. Many died at Gurs, but it was better than what awaited the rest at Auschwitz, which is where most wound up in 1942. The exceptions were those like my mother, whose paperwork for leaving for the US was already in progress. They were allowed to leave in the earlier days of the war. My mother was among the very last Jews allowed out of the camp.

It came as a surprise to me that the roundup in Konstanz came as a surprise to its Jews – especially those who did not really identify as Jews, and did not participate in anything together with the Jewish community. Couldn’t they see it coming as soon as Hitler took power? Well, no, it was explained to me. Sure, they thought, Hitler had it in for Jews, but it was only the obvious Jews – the Eastern European ones who looked so Jewish, whose appearance so sickened Hitler – that he was likely to go after, they thought. Just like their descendants in America would think some eighty years later as visible Jews in Brooklyn began to be assaulted in the streets.

We visited the site at which stood the large shul that was so solidly built, that it took the Nazis three attempts to destroy it on Kristallnacht. It wouldn’t catch fire, because the flammable material had already disappeared three years earlier, when unknown individuals set fire to the shul, destroying six sifrei Torah. At that time, the fire brigade came out to control the fire, and the shul reopened. The city fathers, however, never found – or tried to find – the responsible parties. On the night of the national pogrom, the Nazis also called in the fire department, this time to efficiently set fire to the building by dousing it with a flammable oil. When that didn’t work, they sent for reinforcements from an SS training facility a few kilometers away. They found a “final solution” to the problematic shul. They dynamited it.

Prior to my visit, I had a vague sense that my family on my mother’s side had lived in Germany for some six hundred years. I had thought of those centuries as Jews living simple lives in organized communities in mostly rural settings, paying exorbitant taxes, but otherwise flying under the radar, their lives punctuated by occasional episodes of great tragedy like pogroms, Crusades, and blood libels. In Konstanz, it was a bit more complex. Jews actually disappeared for four centuries. In the middle of the 15th century, Konstanz, which have become an important mercantile center on the Rhine, became the site of an extended Church meeting, the Council of Constance, between 1414-1418. It succeeded in dislodging two out of three claimants to the papal throne. The town archives include a chronicle of events in the city going back centuries, including period illustrations. One of them shows a delegation of Jews presenting themselves to the pope. None of them appeared particularly unhappy, including some of the Jews in the back who were wearing the yellow caps that Jews were obligated to wear. Apparently, they asked the pope for some limited civil rights, and for a guarantee of protection. (They needed it. By this time, hundereds had previously lost their lives in one of the usual host desecration charges, and in a Black Death frenzy.) Their presence in the city was considered economically advantageous; Pope MartinV granted their request, which was honored by King Sigismund as well.

That was good for the Jews, right? Maybe not. During those years, drawn by the council presence and an expanding economy, many people descended on the city in large gatherings, running up large bills at lodges and taverns. Often they would skip town without paying. The aggrieved hospitality providers complained to the pope, who came up with a simple, elegant, and brilliant solution. “Let the Jews pay!” (Did you really think that only Jews could be so clever?) Moreover, the Konstanz Jews had previously been extorted to build a tower fortress for the wall of the city. This made it easier to round up the men, and incarcerate them in the Jews’ Tower until they were ransomed. (Ever mindful of the requirements of both tzniyus and of egalitarianism, the women were held in a different location.)

In any event, the period of enhanced rights did not last very long. By 1432, some pretext got the residents really upset about the Jews, and they were officially expelled, although the authorities were not so efficient about it till a second expulsion order a century later.

Konstanz then went a long time without Jews. Four centuries, to be exact, from the original expulsion order, till the very end of the nineteenth century. The Baden region of the country was progressive, and it offered civil rights to all – even Jews. This once again was good for the city, as successful merchants brought in quality goods, and professionals brought not only their skills, but financed new construction in what had been a medieval city.

Those civil rights culminated, of course, in their deportation during the Holocaust, which demonstrates that you can’t win, at least if you were Jewish in Europe.

Petra, our guide to Konstanz was remarkable. Trained as a biologist, she works in the sociology department of the local university. She is married, and the mother of four. As a young student, she read about the Holocaust, and became committed to see that the memory of Konstanz Jewry, particularly the Jews taken by the Nazi death machine, would not be forgotten. She got involved with the Stolpersteine project to commemorate those who were taken by the Nazis by fixing brass plaques in the pavement in their last place of residence. She works with volunteer students in a local high school (the one my mother attended, before all Jews were ejected) to care for them, and to tell their stories at an annual Kristallnacht commemoration.

In the evening, I spoke about Christian roots of anti-Semitism, and positive developments after the Holocaust. The crowd was almost entirely Christian, but they received the lecture extremely warmly, despite the fact that I was pretty strong and direct about the grossly unbalanced approach that mainline churches (the ones they were all members of) took towards Israel, and how that betrayed a simmering, implicit rejection of Jews. During the Q&A, one person rose to give a speech (doing that during Q&A sessions apparently happens on both sides of the Atlantic) about how guilty Christians were for mistreatment of Jews, and how they had to change things. From the same local high school came some students, a history teacher who designed a curriculum on religious tolerance and who teaches about the Holocaust (including taking students on a school trip to visit the Gurs concentration camp), and a parent leader. The latter was a Muslim woman from Turkey, who was enthusiastic about the need to educate children about the horrors of the Holocaust.

I can’t say that meeting a sizable number of good, decent people was sufficient to dispel the gloom and miasma of the previous hours. But it did put a dent into it. Will those people reverse or slow down the perpetuation of centuries of deep-seated and pervasive anti-Semitism in Europe? I can’t be optimistic. But it might function in a different, important way. It helps us be mindful of the exceptions – of the capacity for all kinds of people to be genuinely good. It is a reminder that the tzekem Elokim / the image of G-d functions well in many people, giving us something to both respect and to work with.