Moving Commentary 9: Outposts and the Power of Mitzvos 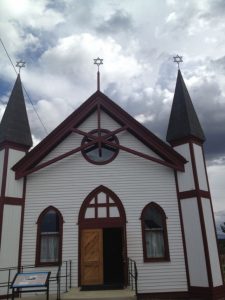 Two years; two remote outposts. Their impact could not have been more different. Consider this a travelogue with a Rosh Hashanah message.

We hadn’t planned to “ascend Hashem’s mountain,” when planning a vacation in the Rockies two summers ago. You could make a case for the designation, I suppose, because of their scenic beauty. But we didn’t expect to find something specifically identified as Jewish. There was no listing for “Kollel Avreichim Vail Summit.”

Find, though, we did. On a scenic drive to a well-preserved mining outpost, we were happy to stumble upon signs of a once significant Jewish presence in Leadville, Colorado. A 19th century shul had survived, and had been restored as a witness of the Jewish life of the past. At over 10,000 feet above sea level, it had been the highest shul in the country. (Colorado marijuana laws have, since then, created much competition for today’s winner in that category.)

The fascinating exhibit told the story of Jews who saw an opportunity to find parnassah here, sometimes as miners, more often running the businesses that supplied them. (Yes, there was a Jewish saloon operator, gun-fighters, and an unsuccessful attempt to exploit popular anti-Semitism to frame some Jews for a murder committed by another.) David May, founder of the May Company chain of department stores got his start here. Newspaper clippings showed how the Jews built their own fraternal groups, but also found a way to join with their non-Jewish neighbors, many of whom came to accept them. There had been several shuls, reflecting different countries of origin, and different levels of observance. The German Jews brought Reform; the East Europeans brought more tradition. (When they began to wane, it was not the Orthodox who were the last to disappear!) There had been no day-school. There weren’t any back then anywhere in the country.

Try as I might, I could not fend off a feeling that I stood among ghosts. The past was gone; it had morphed into a museum exhibit. I had no specific information, but I knew the trajectory of American Jewry – downhill (excuse the pun) all the way. How many descendants of these pioneers could possibly be Jewish today?

This summer, we headed up the hills again – this time, BH, those of Israel. One of the first stops was Zichron Yaakov, where we visited the Museum of the First Aliyah before our picnic lunch. The exhibit tells the story, through film and animation, of the struggles of the Jews who left Europe in the late 19th century to try to eke out a living in the first agricultural cooperatives. It told of simple Jews with abundant emunah, and their struggle with an unwilling land, disease, Arab marauders, and poverty. It also told of their persecution by the agents sent by Rothschild to oversee his projects. Acting as autonomous tyrants (i.e. not on the instructions of the famous Nadiv), they attempted to break the farmers – and their emunah.

Many of the outposts failed. Virtually all of the children of the settlers were won over by the “new” education that substituted socialism for Torah.

Ghosts once again? Hardly. The museum is located smack in the center of town. Diagonally across the street is a sofer stam. The streets of this quiet town are full of obviously Torah-observant people.

Perhaps readers can fill me in as to whether there is any continuity between the founding fathers of the settlement and the modern town. It almost doesn’t matter. The bottom line is two pioneering efforts, yielding very different results. In both cases, children became sacrifices to the appetites of the local gods. One faded into the famous Western sunset; the other, the one of builders, turned – in a manner the founders could never have anticipated – into a thriving community in an independent Jewish state.

The one who can solve the enigma might be Orpah, sister-in-law of Rus. Chazal tell us that in the merit of the paces she walked with Naomi, she merited that her progeny would include four mighty warriors, including Goliath.

Now Orphah is hardly one of the great Jewish heroines of all times. A fuller description of her activities when she returned to her country of origin cannot appear in a family publication. But where we see black and white, HKBH teases out layers of complexity, and credits each person for the good that often coexists with the bad.

Orpah, explains the Nachlas Yosef (R. Yosef Lipovitz, zt”l), was seriously devoted to her mother-in-law, and was prepared to sacrifice her own happiness to help Naomi. Her initial walking on the road with Naomi was full of goodness and commitment, which took unusual inner strength to prevail against the tendency to simply say good-bye. Her strength, as well as the genuine tears that she shed when she finally took leave of Naomi, had to be rewarded. It generated children of exceptional inner and outer strength.

Rus, of course, went a good deal further. She used her strength to conquer the last traces of self-interest that could have stopped her from joining Naomi. Her reward far richer – the building of the House of David, and its ultimate expression in a messianic redeemer. He will usher in an era of universal good predicated upon the ability of people to disregard self-interest, and devote themselves to the other. This new world will owe in part to the ancestors of both Orpah and Rus – the daughters of Lot, writes the Nachlas Yosef! They, too, were ready to sacrifice in order to build a new world – and such dedication is never lost!

Hashem cherishes builders. (Omri, the father of Achav, was not one our more righteous leaders, to put it mildly. Yet Chazal praise him for adding on a new city in Israel. Upbuilding can be good, even by tyrants) Those who came to the Rockies were looking for survival. They will certainly be rewarded for whatever they did to assert their Jewishness and take pride in it. But they were not builders. Those in the agricultural settlements (of Zichron Yaakov, and other places like Mazkeret Batya, about which we wrote about a few years ago[1]) decidedly were builders. Their determination to build was not lost, even if they could not see this within their own tragic circumstances.

Why don’t we see much more of the spillover effect of mitzvos and good intentions? We can often clearly see the catastrophic consequence of a single transgression, beginning with that of Adam. If the power of a mitzvah is greater than that of an aveirah by orders of magnitude, why is it much harder to see the imprint upon ourselves and our surroundings of a mitzvah?

Ramchal addresses what I think is a related question in Derech Hashem.[2] Mitzvos are not arbitrary. They are designed to elevate us. Moreover, they are the sole source of elevation. Once we die, there are no longer any opportunities for growth. Why, then, do we not see that elevation in the neshamah of a person who has been acting properly for decades? What is it that spells the difference between a moment before death – when a person has done all the good deeds he will even do, and yet is very much a human being – and a moment later, when he becomes more similar to the denizens of the spiritual worlds?

Ramchal explains that the elevation of the neshamah is suppressed so long as it is joined to a body. (He implies that if this were not the case, the gradually-perfected neshamah would not be able to continue its association with the guf, and that association is crucial to the whole point of a person’s sojourn through this world. The soul grows continuously through a life lived according to Hashem’s Will, but the luminous quality of that growth is covered over. Even the neshamah itself is unaware of its attaining levels of perfection. After death, the accumulated potential of that soul is finally freed to express itself and radiate its brilliance.

The price we pay for this, I believe, is significant. We walk through life unaware of how much we have accomplished for ourselves. Understandably, we do much soul-searching in the run-up to the yemai ha-din. To push ourselves to do better in the future, however, it is important to not only feel the trepidation with which we face our judgment, but to firmly comprehend how potent every mitzvah is – indeed, every thought, intention and plan to do good things. They contribute mightily to who we are, and to shaping the world around us.

Hashem cherishes it all, translating our good will into results we could not achieve on our own- or sometimes, even dream of achieving.