The Art of the Decertification 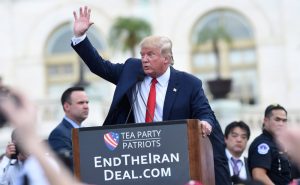 What does President Trump’s decertification of the Iran deal mean, and what does it mean?

That wasn’t a mistake. There are two questions here. What exactly it is that the president did, and what does it herald for the world’s future.

Back in 2015, then-President Obama approved the international agreement to restrict Iran’s advancing nuclear program. But the deal wasn’t an actual treaty, which would have required Senate approval. Skeptical lawmakers wanted to assert some sort of control over the accord, and so Senators Bob Corker (yes, that one) and Ben Cardin helped pass bipartisan legislation, the Iran Nuclear Review Act (INARA), requiring the president to certify important aspects of the deal to Congress every 90 days.

Heeding the advice of his foreign-policy advisers, President Trump did so twice. When the third deadline arrived this month, though, he opted not to, claiming that Iran is violating the terms of the agreement – or, as Secretary of State Rex Tillerson clarified, its “spirit.”

While United Nations inspectors, the other parties to the deal and even top Trump administration officials (including Mr. Tillerson, Defense Secretary Jim Mattis and the chairman of the Joint Chiefs of Staff, Joseph Dunford) maintain that there haven’t been substantive Iranian violations of the deal, and that Iran’s nuclear program has been halted for now, the president, who repeatedly denounced the deal during the presidential campaign, concluded that, nevertheless, the time has come to force its renegotiation.

He could have just pulled the U.S. out of the deal – a president created it, and a president can extinguish it – but instead opted to simply not certify the agreement, punting its fate, at least for now, to Congress.

And so we’re brought to the second question: What does the president’s recent action mean – for the future?

It’s not hard to make a case that, despite its abiding by the terms of the deal, the Iranian regime is belligerent and dangerous. It has gone full speed ahead with its ballistic missile program (which falls outside the nuclear agreement) and is deeply involved in murderous mischief in places like Syria and Lebanon. It has harassed American ships in the Persian Gulf and underwritten Hezbollah’s operating budget. It credibly competes with North Korea for first prize in the category of malevolence.

Still, insisting on major new concessions from Iran – which President Trump wants Congress to do – or pulling out of the Iran deal altogether, as he has threatened to do if Congress fails him, could result in a colossally sticky wicket. Right off the bat, it will provide Iran an excuse to fully resume its nuclear weapons program. The mullahs have already gone ballistic in the literal sense with their missile program; they might well be expected to do the same in the phrase’s figurative sense.

Iran’s “Supreme Leader” Ayatollah Ali Khamenei has already announced that “If the U.S. tears up the deal, we will shred it.”

A mere two years ago, U.S. and Israeli intelligence measured the breakout time for an Iranian nuclear weapon in weeks. Currently, due to the deal, that can is kicked down the road at least 15 years (by which time Iran may have a new, less lunatic leadership; and, if not, the military options considered two years ago can be reconsidered). Should the deal be abrogated, though, we’re back to 2015.

Then there is the expected fallout from the U.S. reneging on an agreement, even one that isn’t an actual treaty. Russia and China, as signatories of the Iran deal, will question whether the United States can be a reliable negotiating partner, at a time when cooperation among the major powers is vital in fighting radical Islam. And if there currently exists any hope that diplomacy might mitigate North Korea’s designs, there won’t be then.

So the president is taking a serious gamble, with much at stake.

Ironically, though, the very recklessness that Mr. Trump seems to project could win him the endgame here. Because it is at least conceivable that Iran’s leaders, for all their bluster, in fact feel endangered by a seemingly unrestrained American leader who openly threatens his country’s enemies with utter destruction.

Part of what propelled Mr. Trump to the presidency was his proclaimed success as a dealmaker. Might his Iranian gambit turn out to have been a shrewd move that yielded not World War III but long-term security for the civilized world?

We must hope it will and, more important, be mispallel that lev melech here will be firmly b’yad Hashem (Mishlei 21:1).