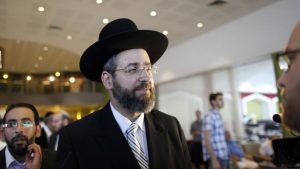 (This article appeared in Times of Israel.)

Two weeks ago, Reform, Conservative and Federation leadership sounded the alarm about the now-delayed Conversion Bill, falsely presenting it as an assault on non-Orthodox and diaspora Jews:

This ugly incident leads into the latest, similar scheme – this time regarding diaspora rabbis’ testimony to the Israeli Chief Rabbinate for issues of personal status.

ITIM, led by Rabbi Dr. Seth Farber, requested of the Chief Rabbinate a list of overseas rabbis who were approved to testify on matters of personal status. As part of the Chief Rabbinate’s response, ITIM was issued a list of rabbis who had previously submitted letters of testimony that were rejected. The list did not state the reason for the rejections, nor did it state that the rabbis were blacklisted or not deemed legitimate for other purposes; it merely stated that the following rabbis had submitted letters of testimony that had been rejected. (The list was not done professionally, as some rabbis were mistakenly included – but issues of bureaucratic sloppiness and worse are another story.)

As an Orthodox rabbi, I want to state categorically that rejecting people’s Jewishness is anti-halachic. The halachah is clear: Jews are to be believed if they say they are Jewish.

This statement was made in the context of Rabbi Farber’s discussion of rabbis whose conversions are not halachically valid and whose definition of Jewish birth status does not comport with Halacha.

A few days later, in a Jewish Journal article, David Benkof took Rabbi Farber to task and wrote that there is no blacklist, and that ITIM was misrepresenting the facts:

The term (blacklist) is wholly inappropriate. Blacklists are not retroactive. Even calling it a “list” implies that Israel looks up the names of rabbis submitting letters to see if they’ve been banned. We have no evidence that’s happening. All we know is that in 2016, certain letters were rejected (for whatever reason) and Rabbi Farber’s Freedom of Information request collected their names. That’s it.

If Israel had a policy to reject letters from all non-Orthodox rabbis (and some left-of-center Orthodox rabbis), that indeed would be news and worthy of debate. But more than 3,000 Americans move to Israel each year, many hundreds of whom are non-Orthodox, and hundreds of whom get married each year. If the rejections are ideological, why are letters from only 45 non-Orthodox American rabbis being rejected? And why none from women?

We don’t know why these letters were rejected, because neither the rabbinate nor Rabbi Farber are saying. But my guess is that many were for routine matters – confirming the Judaism of the mother but not the grandmother, for example. In one case I know of (in a previous year), the rabbinate rejected a proof-of-Judaism letter because it was signed by a rabbi whose name was not on the stationery. In another case, a supposedly blacklisted rabbi had one of his letters rejected but others accepted. Sure, the rabbinate may have also rejected some letters because of antagonism toward the rabbi who wrote them. But it hasn’t said so, and that as-yet-unproven possibility does not justify scandalous headlines.

I hesitate to use a 2017 cliché like “fake news,” but this is an entirely manufactured controversy, and we know who manufactured it: Rabbi Farber. In an essay published earlier today in the Jewish Journal, he used the issue of proof-of-Judaism letters to renew his longstanding antagonism toward the rabbinate, and that’s his right.

But the timing of the controversy couldn’t be worse, while Diaspora-Israel tensions are at historic highs. Looking around social media, some American Jews are starting to think, “Israel reneged on its deal accepting the way I want to pray at the Kotel, won’t accept non-Orthodox conversion, and now is keeping a blacklist of rabbis like mine? Forget it.”

It doesn’t matter that all three of those claims are unfair. The mounting “evidence” that Israel disdains the bulk of American Jewry is straining the relationship and in some places even beginning to break it.

The Jewish people should be looking to defuse those tensions right now, to find common ground between Israel and the Diaspora. But 21st century social and other media tends to reinforce people’s prejudices, and nuggets of news that do just that can zip around the net before anyone has a chance to “Snopes” them.

Well, in this case, Snopes would give “blacklist of rabbis” a big, fat FALSE. It just doesn’t exist.

The Chief Rabbinate’s reaction to the situation matches that of Mr. Benkof, and, in fact, Rabbi Farber’s own words controvert his allegation that the Chief Rabbinate maintains a blacklist. Rabbi Farber, when explaining how the issuing of a list of rabbis who had submitted documents of testimony that had been rejected amounts to the maintenance of a blacklist, remarked:

Hence, even according to Rabbi Farber, the list is not an actual blacklist, despite his several accusatory statements elsewhere that it is.

Apparently having been put on the defensive by Mr. Benkof and by others who were skeptical of ITIM’s claims that the Chief Rabbinate maintains a blacklist, ITIM’s legal adviser affirmed Rabbi Farber’s assertions, in an weakly-argued article whose main point boils down to the same point that emerged from Rabbi Farber: there is no actual blacklist, but, according to ITIM’s interpretation, there is an effective blacklist, based on the rejection of previous documents of testimony. The logic is wholly unconvincing and only makes sense if a load of unproven assumptions is added to the mix.

Now, in a freshly-released Jerusalem Post interview with Rabbi Farber, it has become even more clear that there is no blacklist and that the entire matter is a fabrication. During the interview, Rabbi Farber is seen holding the “blacklist” issued by the Chief Rabbinate to ITIM. The list is entitled “Reshimat te’udot she’lo ushru” – “List of certification letters that were not authenticated/accepted“. It is not a list of rabbis deemed to be invalid. To assert that it is a list of rabbis deemed to be invalid is to totally misrepresent the document. But that is exactly how Rabbi Farber proceeds to label the document in the course of the interview, after which he declares that the documents of these rabbis – which he never even saw or investigated – “were just rejected out of hand”. Rabbi Farber then turns to a document issued by the Chief Rabbinate two years prior regarding rabbinic qualifications and conflates it with the list of rejected documents, arguing that the Chief Rabbinate has unfairly rejected the documents in the list due to the qualifications of their signatories. This is totally unsubstantiated conjecture, presented by Rabbi Farber like a prosecuting attorney waving a smoking gun covered with the fingerprints of the accused. Rabbi Farber jumps past the interviewer’s targeted questions and twists the facts into a pretzel to conform to his agenda. Please tune in to the interview and see for yourselves.

During the interview, Rabbi Farber was asked about rabbis whose standards for Jewish identity do not conform with Halacha. Rabbi Farber maintained that letters of Jewish personal status should be accepted from these rabbis as well.

Putting this all aside, many are leery of those who attempt to streamline the heavy bureaucracy of the Chief Rabbinate’s system and make it perhaps more user friendly. There are many horror stories of people who claim to have been badly bruised, and worse, by this system. Why are people, including those who do not fully identify with the Chief Rabbinate, often hesitant to jump on board with those seeking to rectify?

The answer is that rather than merely seeking to make the system work better, many of those who profess a desire to fix it actually seek to either dismantle the Chief Rabbinate or to materially lower its standards. These people do not appreciate the critical importance of preserving halachic identity status according to the highest standards – something that the Chief Rabbinate is tasked to do. If these people would separate their own agendas from the noble agenda of fixing a user unfriendly system, we would all be in better shape. (To be fair, Chief Rabbi Lau has committed to make many substantive improvements; I respect that and am not trying to detract from those efforts.)

ITIM has dishonestly smeared the world’s largest rabbinical organ, portraying it to millions of people as maintaining a blacklist that in truth does not exist. ITIM has also shown that it supports the acceptance of letters of Jewish personal status from rabbis who do not adhere to halachic standards, and that it expects the Chief Rabbinate to accept these letters as well.

Fighting for a worthy cause is to be lauded – but doing it dishonestly, and while discarding halachic standards, is to be condemned.

(Readers are invited to visit the Coalition for Jewish Values website for articles by Cross-Currents writers and others on issues of Torah values in the public sphere.)