The Terminology of Terrorism 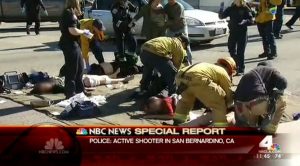 The June 19 attack in London, in which a man plowed his van into a crowd of Muslim worshippers exiting a mosque, killing one and injuring 10, was no less heinous than attacks by Islamists on other innocent people.

The London attack was the subject of scores of news reports over ensuing days.  But that didn’t prevent National Public Radio social science correspondent Shankar Vedantam to, in the wake of the attack, reprise a March study by three Georgia State University researchers who maintain that non-Islamist terrorism is largely, and irresponsibly, downplayed by the media.

The fact that violence against Muslims and Islamic institutions are occurring more than ever is unarguable. Mere days before the recent attack on the London worshippers, in Malmö, Sweden, a man with neo-Nazi links drove his car into a group of Iraqis who were peacefully demonstrating against tightened Swedish asylum rules. Thankfully, no one was injured in that attack.

Six people, though, were killed and nearly 20 wounded in January, when a white nationalist opened fire on an Islamic cultural center in Quebec City. That same month, an Islamic Center in Austin, Texas was destroyed by a fire. Last month, a man fatally stabbed two people and injured a third, after he was confronted for shouting what were described as racist and anti-Muslim slurs at two teenage girls on a train in Portland, Oregon.

Mosques, moreover, have been vandalized with increasing frequency over recent years and months, both in the U.S. and across Europe.

All that said, however, the study touted by NPR, whose report was picked up by a broad assortment of other news outlets, is seriously misleading.

The study’s researchers examined news coverage from the database LexisNexis Academic and CNN for terrorist attacks – defined as “the threatened or actual use of illegal force and violence by a non-state actor to attain a political, economic, religious, or social goal through fear, coercion, or intimidation” – in the U.S between 2011 and 2015. They found that “attacks by Muslim perpetrators received, on average, 449% more coverage than other attacks.”

Quite a shocking discovery, at least at first read. But a second read is in order.

The first chink in the armor of the researchers’ conclusion lies in the definition of “terrorist attacks.” According to the study’s characterization, terrorism encompasses not only shootings, stabbings and bombings, but arson, too – and graffiti and eggings and phone threats (“the threatened or actual use of illegal force…”).

To be sure, all those things are ugly and evil, and in many cases may be rightly classified as hate crimes. But the word terrorism, most people would likely assert, should be reserved for actual violent attacks on actual human beings.

Another less obvious but more trenchant vulnerability in the researchers’ conclusion about the ostensible under-reportage of non-Muslim-committed crimes lies in the academics’ failure to distinguish between acts born of anger and those born of ideology.

The vast majority of Muslims worldwide are concerned with things like dietary laws, fasts and praying; they do not seek to kill people. Which is why the word “Islamists” has been coined to refer to those who in fact wish to murder innocents – including innocent Muslims whom they consider to be infidels.

As odious as those who attack Muslims are, and as deserving as they are of prosecution to the fullest extent of the law, most if not all of them are motivated by raw anger and misguided notions of revenge, not by any ideology of ridding the world of those who follow Islam. Before 2001, hate crimes against Muslims in the U.S. were almost unheard of.  While there are certainly haters of Muslims – and Jews and blacks – out there, there are no “Christianists” seeking out non-Christians to kill, as there are Islamists seeking to murder those who believe differently than they do.

That is a distinction with a dire difference. The Georgia State researchers aver that “U.S. media outlets disproportionately emphasize… terrorist attacks by Muslims – leading Americans to have an exaggerated sense of that threat”; and they lament that “it is no wonder that people are afraid of the Muslim terrorist. More representative media coverage could help to bring public perception of terrorism in line with reality.”

The reality, though, is that Islamism is a clear, present and determined danger to all civilized people, non-Muslims and Muslims alike. And the public perception of that fact is entirely justified, as is the prominent reportage of ideology-driven murder and mayhem.

The researchers’ and NPR’s desire to point out the prevalence of non-Muslim crimes is commendable. But it does no one any favor to try to minimize the singular threat to civilization today that is Islamist terror.