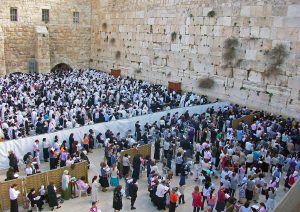 I, like so many other Orthodox Jews , have a number of non-Orthodox relatives. When attending simchas (festive occasions) of my family, including those which involve synagogue attendance, my non-Orthodox relatives know that they are guests at an Orthodox event, and they comport themselves with the proper respect. Not once has any of these relatives ever insisted upon sitting together with his wife in our synagogue or being served non-kosher food at our sons’ bar mitzvah meals. It was simply unthinkable.

All of us are familiar with the sight of non-Orthodox Jews at the Western Wall, as they cover their heads, separate off to the men’s and women’s prayer sections, and realize that they must be heedful of the heightened and intense level of sanctity of that most special locus. In all of my times praying at the Wall, I not once recall a non-Orthodox Jew refuse to cover his head or demand that his wife pray together with him. It was simply unthinkable.

All of us are familiar with the sight of non-Orthodox Jews at the Western Wall, as they cover their heads, separate off to the men’s and women’s prayer sections, and realize that they must be heedful of the heightened and intense level of sanctity of that most special locus.

These are the sentiments that come to mind as I read of the condemnation and fury on the part of the heterodox denominations at the Israeli government’s decision not to move forward with the Western Wall Compromise Plan, with the support of the Chief Rabbinate and most of the religious members of the coalition backing (driving) the government’s decision. The very expectation that a strictly Orthodox prayer area since time immemorial should compromise its standards and enable on-site desecration of Halakha (Jewish law) in deference to the demands of those who do not respect Halakha is exceedingly hard to swallow. Looking at the matter after taking a step back makes one wonder how the Western Wall Compromise Plan got off the ground in the first place.

Unfortunately, the heterodox movements are not taking the matter sitting down.

Rabbi Rick Jacobs, who serves as president of Union for Reform Judaism, condemned the Israeli’s government’s “shameful decision”, as his group canceled a meeting (on an unrelated matter) with Prime Minister Netanyahu in protest. Jacobs declared:

The decision cannot be seen as anything other than a betrayal, and I see no point to a meeting at this time.

International Rabbinic Fellowship (IRF), a left-wing American group whose leadership is very closely affiliated with Yeshivat Chovevei Torah and Yeshivat Maharat (both Open Orthodox), condemned the government’s decision as well as its support for the Conversion Bill (legislation that only recognizes conversions in Israel performed by the Chief Rabbinate). IRF expressed its “deep disappointment” and its continued support for the Western Wall Compromise Plan:

The plan, which like any compromise, can be improved upon (e.g. creating a space for Orthodox women’s groups that do not want to engage in full egalitarian prayer but do want to read from the Torah) is a positive step forward to making the Kotel a public place where all Jews can experience the presence of the Divine according to the dictates of their conscience.

The Western Wall is not a sectarian property. We must give everyone a sense that it is their home. It is the heart of the Jewish people.

(For a refreshing and objective view on the Conversion Bill, Rabbi Berel Wein’s commentary is an absolute must-read. “Objective” is the key word here that seems to elude this bill’s detractors.)

Eric E. Goldstein, CEO of UJA-Federation of New York, likewise condemned cancellation of the Western Wall Compromise Plan, writing that the decision will “destroy the fundamental principle that Israel, our Jewish homeland, is a place where all Jews can and must feel at home.”

The Kotel belongs to all Jews worldwide, not to a self-appointed segment.

Stepping back from the inflammatory context and the rhetoric, Goldstein and Harris (and even Rabbi Benny Lau) have tried to turn the tables upside down. Rather than Jews feeling as humbled guests at the Western Wall, whose protocol follows Halakha, Goldstein and Harris demand that they and their constituents should be able to dictate the rules there, as if the holy site were their private home. To quote Rabbi Benny Lau, “We must give everyone a sense that it is their home.”   (And did we not recently read in the Torah of a person who refused to heed the dictates of Moshe’s Torah leadership, arguing instead to decide Halakha in an egalitarian manner according to the will of the masses, and the rebellion and calamity that ensued?)

The backdrop of this story – a fact glaringly omitted from the heterodox groups’ protests and condemnations – is that in August of 2013, the Israeli government already established a multi-level egalitarian prayer area, the “Ezrat Yisrael Plaza”, at the Robinson’s Arch region of the Western Wall compound. (See photo here.) This large and beautifully renovated area failed to attract throngs of non-Orthodox Jews, who preferred instead to join Orthodox services at the Wall. The fact that opportunity for heterodox prayer was accommodated at Robinson’s Arch, but was largely declined by non-Orthodox worshippers, is curiously omitted from heterodox leadership’s harsh new discourse.

To demand the introduction of that which is a violation of Halakha into the most sacred traditional Jewish prayer site manifests great irreverence and sheer chutzpa. For thousands of years, Halakha was respected at this holy locus by Jews of all stripes, who deferentially conformed there to the requirements of Tradition.

Would the Reform and other heterodox denominations demand that their adherents who visit mosques be authorized to conduct themselves therein in a manner that offends the religious norms of traditional Islam? Why is the Western Wall any different?!