Anti-Israeli Hypocrisy, and the Sacredness of Self-Defense 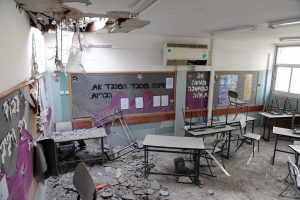 A 37 year-old Jordanian man started stabbing an Israeli police officer this past Sunday, May 14, in Jerusalem and was shot dead in the act by the police officer. (Please click here for a better video of this event.)

How did Jordan react to this terror incident? By condemning the Israeli policeman’s commission of a “heinous crime” of self-defense against the stabber (!).

“It is outrageous to hear the Jordanian government’s speaker support the terror attack which occurred today in Jerusalem’s Old City.

“The security video clearly shows a Jordanian tourist stabbing an Israeli policeman with a knife.

This past Thursday, May 17, a mob of stone-throwing Palestinians surrounded the car of an Israeli and ambushed him. Fearful that he was about to be murdered, the Israeli opened fire, shooting one of the attackers and surviving the assault.

Why was this Israeli, in his car, not able to continue driving and avoid the stone-throwing mob? Because a Palestinian ambulance intentionally blocked his car, in order that he be trapped and killed by the wild mob.

Last month, two Palestinian sisters from Gaza who were granted entry to an Israeli hospital for cancer treatment were arrested for smuggling explosives, to be used in terror attacks against Israelis.

And during the Gaza War, United Nations schools for Palestinians were used to store Hamas weaponry. The UN has acknowledged this to be a repeated occurrence.

This is all the height of hypocrisy: A policeman shooting an attempted murderer being condemned for the crime of self-defense, an ambulance, which is supposed to be used to save people’s lives, being used to enable a terror ambush, women who are granted access to life-saving medical care using their access to enable terrorism against those who are healing them, and educational institutions are used to store terrorist explosives and are hence knowingly made into war targets by those who benefit from these institutions.

Welcome to the world of Jordanian and Palestinian terror hypocrisy. Is it any wonder that making peace under these conditions is a bit difficult, to put it mildly?

Jerusalem’s Chief of Police praised the May 14 act of self-defense by the policeman being attacked by the Jordanian:

“We are very proud of you, proud of what you did and how you reacted. You responded correctly, you were at the right place. I am personally proud of you. Your commanders and all of us in Jerusalem are proud of you.”

This is how law enforcement agents who shoot assailants need to be praised. It is not enough for a district attorney to decide that the officer “cannot be charged”; the officer should be extolled for his acts, sending a message that we dare never blur the lines between right and wrong.

Rabbi Joseph B. Soloveitchik, one of the greatest rabbinic scholars of the 20th century, stated in the course of a 1974 Bible lecture in Boston:

“The dignity of man expresses itself through the latter’s ability to take a stand and defend whatever God gave him, and to defy the opposition, if the opposition is wrong… We have a section in the Torah which deals exclusively with the rights of self-defense.”

We must not only allow legitimate self-defense, and not only praise it (something rarely done in liberal societies), but we must respect it as an act of sacred dignity and hallowed heroism.