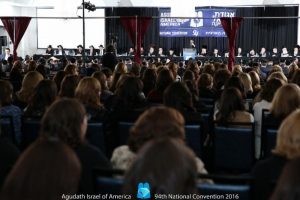 Like many others who have forwarded this Facebook post to friends, it was love at first sight. For those who are not FB friends of Suri Weinstock of Passaic, here is a refreshing look at last week’s Agudah convention, presented without editorial comment.

So,I just came back from The Agudah Convention yesterday, and I have been mulling over some of what I’ve experienced. This may sound bad or a little jaded, but I must admit that I was surprised by how not extreme, normal, and positive they were! Here I was, literally surrounded by some of the undisputed gedolei hador, listening to incredibly holy people, and a part of me was expecting to hear things like, “You are awful and not frum enough and it’s causing people to get cancer!,” etc.

But that’s not what happened.

Instead, I heard this from Rebbetzin Leah Feldman, wife of the Rosh Yeshiva of Ner Yisroel, when a woman asked how much she should sacrifice for her husband’s learning, as it was leaving her to feel neglected: The Rebbetzin didn’t need a second to think, before saying that a woman must tell her husband that she needs his time and attention! And it’s too bad if his learning has to wait a little! She said something along the lines of “You matter and your relationship matters! And if you wait around for him to figure this out, you’ll be waiting forever! Men never figure anything out!” Many of us burst out laughing of course, but she was not trying to be funny. This wise and holy woman was dead serious. But this was not what we were expecting.

When Rabbi Yaakov Bender, Rosh Yeshiva of Darchei in Far Rockaway, addressed someone’s concern that his son wants to follow sports, he said that you have to raise your kids to be normal. If they are good kids who go to yeshiva, and have a good family, and they want to follow sports a little — relax! You don’t have to encourage it, but it won’t send them off the derech either! Now, no one can accuse R’ Bender of being on the fringe of Orthodoxy. He is a true talmid chochom. This is da’as Torah and that is what he said.

And this one may surprise a lot of you: When Rabbanit Yemima Mizrachi was asked how a woman can encourage her daughter to dress b’tzanua, she said “You must speak about tznius, *b’tzanua.* Be gentle and positive, and tell her she is beautiful and holy. And whatever you do, STOP telling her she is causing others to sin! STOP!! Tell her she is holding up the world and elevating the spiritual plane of the Jewish people with her tznuit and mitzvot! And don’t you DARE tell her she is causing people to sin!!” She literally screamed this at us! She said when you are constantly talking about your daughter’s body or your son’s eyes, you are not handling the matter b’tzanua, and are missing the point, all the while creating damage.

Let’s just say this was not the way the topic of tznuis was approached in school when I was a kid. But this was coming from the top at The Agudah Convention itself. This is the truth. This is the feeling that is supposed to be transmitted to our girls. It makes me wonder where the message is getting confused along the way, and how we can go back to basics…

I remember before I left for the convention, my sister asked me if I was nervous about going somewhere where I didn’t know anyone, and would have to endure making endless small talk with the random women I was seated with. I told her I wasn’t worried, as I would be sitting with my husband. She was shocked. “They have mixed seating?!” She asked. Well, yes. There were many groups of Jews in attendance, and the Chassidim who did, indeed, want separate seating, had their own dining room so they may do so. And guess what? We all got along! Pretty neat, huh?

Of course, that’s not to say all we heard all weekend was feel good fluff. A true Gadol B’Torah doesn’t have to pull any punches. Rabbi Elefant spoke very strongly about our generation’s over indulgence in the physical. Always chasing the finer things in life and losing focus on what it is we are meant to be doing in this world. Rabbi Frand talked about the tremendous mesiras nefesh that former generations readily made, while we are complacent and feel no need to exert ourselves. He said we must consider the environments in which we choose to work, even if it means making sacrifices in order to avoid negative influences. Rabbi Bender implored us all to learn to live with each other with kindness and decency. He made it clear that if you block someone’s driveway because you wanted to make it to Mincha, your tefilla wasn’t worth much. He and others said you should knock on the doors of your Non-Jewish neighbors when you move into a new town, and introduce yourself and find your common ground. Be nice; be a good neighbor. Do what Rav Pam’s Rebbetzin did and hand out candy on Halloween.

Many of the speakers bemoaned the fact that we are lacking in our Jewish pride. We look outside instead of in, to find meaning in our lives. We have forgotten the privilege and responsibility of being the Am Hanivchor. Well, walking out of the convention, I felt an invigorated sense of pride and hope.

Can you imagine what our communities would look like if we actually listened to these gedolim and modeled our lives in this way? If we all looked up, and listened to what THEY had to say at the top, instead of glancing side to side, to see what others were doing? Imagine if we really stood for something authentic and real, and had true pride in being Torah Jews. What would it be like if we focused less on how many years a possible suitor planned on learning for, and more on returning our souls to our Maker in an elevated state? What would it mean if we treated our neighbors, Jews and Non-Jews alike, with respect and friendliness, exchanging gardening tips (like I do with mine) and asking how their families are doing? Wouldn’t that be something special? Well, I think it would be incredible. Please share this post if you think so too. Let’s start moving in this direction together, putting our faith in Hashem, in the true leaders of Klal Yisroel, and in ourselves.