The Boys Who Cried “Anti-Semite!” 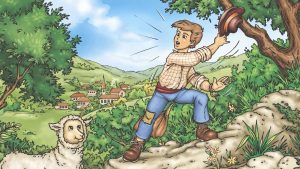 The sobbing of some political liberals, including, of course, many Jews, that ensued after the presidential election results were tallied has turned into wild wailing with the appointment of Stephen Bannon as senior counselor to the president-elect.

Those observers were shocked enough back in August, when Mr. Bannon, the executive chairman of the politically conservative Breitbart News, was put in charge of Donald Trump’s campaign. Now, though, mouths are foaming.

In the Jewish world, the Union for Reform Judaism accused Mr. Bannon of being “responsible for the advancement of ideologies antithetical to our nation, including anti-Semitism, misogyny, racism and Islamophobia.”

The Anti-Defamation League said that Bannon is “hostile to core American values.”

Forward editor Jane Eisner, asserted that with Bannon’s appointment, “the anti-Semitic sentiments of the far right are closer to the center of political power than they have been in recent memory.”

And the National Council of Jewish Women pronounced its verdict: “Bannon and his ilk must be barred from his [Trump] administration.”

The actual evidence for labeling Bannon an anti-Semite, or enabler of anti-Semites, or racist, or all-around monster is slim. No, actually, nonexistent.

Not that a yeoman’s effort hasn’t been expended to make the case. The news organization that Mr. Bannon has headed since the death of its founder Andrew Breitbart in 2012 is certainly not to many people’s tastes (my own included). It makes famously right-leaning Fox News seem like a liberal lamb. And it has a penchant for putting provocative headlines on entirely reasonable (if arguable) opinion pieces.

Headlines like: “Bill Kristol: Republican Spoiler, Renegade Jew.” That Breitbart piece, written by political conservative David Horowitz, was an unremarkable gripe about the fact that Mr. Kristol, a dean of American conservatism, had written critically about Donald Trump. Mr. Horowitz noted how “Iran, the Muslim Brotherhood, Hezbollah, ISIS, and Hamas” have “openly sworn to exterminate the Jews,” and shared his feeling that the Obama administration was not adequately facing that threat to Jews and to America. “To weaken the only party that stands between the Jews and their annihilation, and between America and the forces intent on destroying her,” Horowitz wrote, “is a political miscalculation so great and a betrayal so profound as to not be easily forgiven.”

Whatever one might feel about that article’s thesis, it was run-of-the-mill intra-Republican kvetching and not, by any measure, anti-Semitic.

Another piece of “evidence” for Bannon’s malevolence is the claim of his former wife, in divorce documents, that, while seeking a private school for his children, he made a remark about “spoiled” Jewish children. Needless to say, unsupported (and denied) accusations in divorce proceedings deserve no one’s attention.

The strongest charge against Mr. Bannon is his statement in an interview last summer that Breitbart News is “the platform for the alt-right.”

But, as has been noted before in this space, the “alt-right” means different things to different people, and includes widely disparate elements.

What those elements generally share is a dedication to family values; a reverence for Western civilization and rejection of multiculturalism. The fringes of the movement, though, can include racism, opposition to all immigration and anti-Semitism. The fringes of the “progressive” wing of American politics, too, include Jew-haters (though they dress up their hatred as “anti-Israel” sentiment).

Imagining that Mr. Bannon meant to include the alt-right’s tattered fringes in his statement is ungenerous, and unsupported by the actual content of Breitbart offerings. As far back as 2014, he explicitly predicted that racism would eventually get “washed out” of right-wing movements.

As it happens, not only was the late Mr. Breitbart Jewish, but the news service carrying his name was started by a Jewish lawyer and businessman, Larry Solov, who conceived it during a trip he made to Israel with Mr. Breitbart. It was to be “a site,” Mr. Solov wrote, “that would be unapologetically pro-freedom and pro-Israel.” Which it has been.

I don’t automatically accept the veracity of what I read at Breitbart, or in The New York Times. Every news medium, whether it admits it or not, has its slant and partialities. A semblance of accuracy can only be gained by reading, and balancing, a variety of media, fully aware of each one’s biases.

Racism and anti-Semitism are malign, to be sure. So, though, is, carelessly and without evidence, casting labels like “racist” or “anti-Semite” about.